A FLIGHT from Manchester was delayed by more than seven hours after a passenger opened the plane emergency exit – after thinking it was the 'toilet door'.

Passengers on the flight were then forced to leave the plane after the emergency chute was automatically deployed. 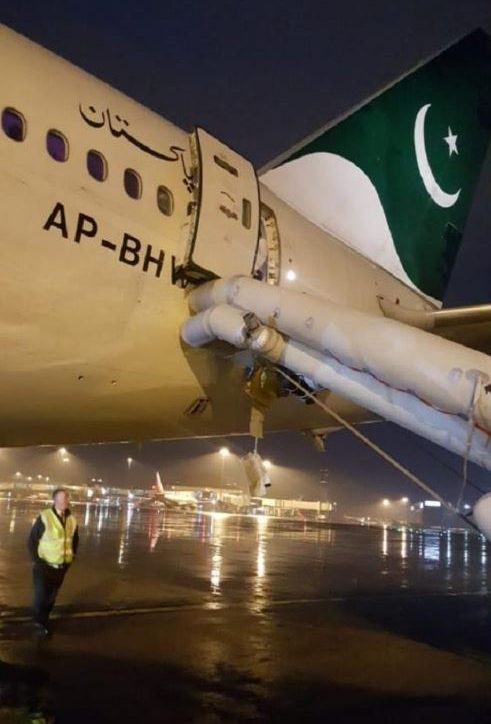 The female passenger was travelling from Manchester Airport to Islamabad with Pakistan International Airlines (PIA) when the incident occurred, according to the Express Tribune.

The woman was boarding flight PK702 when she opened door L5, the door at the back of the plane on the left hand side, after thinking it was the door to the toilet.

Passengers were then removed from the flight, with it unclear how the woman was able to open it without the cabin crew stopping her.

The departure time was pushed back from 9:20pm on the Friday to 5am on the Saturday morning, landing at 4pm the following day – seven hours later than scheduled.

When the flight did take off, 37 passengers had to be removed from the flight due to the emergency chute no longer on the aircraft, making it a legal requirement in case of an emergency evacuation.

One passenger, who offered to leave the flight after the incident, complained about the problems that followed.

A Twitter user wrote: "@Official_PIA pathetic service from PIA. I am one of the 38 passengers who voluntarily off loaded from PK702 so it can fly to Islamabad only on the condition that all 38 of us will get our luggage.

"First you did not give it to us in Manchester [and said] that it's going to take time, so don't worry it will be taken to Pakistan on your next flight.

"Then when we reached here today we were told half of our luggage is still at Manchester airport. We have suffered a lot."

Other passengers were also affected, with flight PK771 from Islamabad to Copenhagen delayed after the aircraft was late leaving the UK.

"We strongly urge passengers to follow security instructions as such mishaps result in inconvenience of hundreds of other passengers."

A PIA spokesperson told the Express Tribune: "The plane was parked on the runway when the airbag chute opened, so there was no threat of any kind."

Last month, a 65-year-old passenger was arrested after he opened the plane's emergency door so he could get off the flight quicker.

In April, passengers were left terrified and screaming after an easyJet passenger tried to open the door of an easyJet plane mid-flight.