‘It’s an addiction’: Meet the ‘Bondi Treasure Hunter’, who travels the world looking for underwater loot, with finds including safes, guns and a barnacle-covered BMW motorbike

An Australian treasure hunter has found 50 safes, handguns, bullets, a BMW motorbike, thousands of bicycles, jewellery and the odd gold coin while travelling across the world for more than 15 years.

Leigh Webber, 40, known as the Bondi Treasure Hunter, specialises in underwater treasure hunting, from magnet fishing in Amsterdam to underwater metal detecting in Ibiza and Thailand.

His passion for treasure hunting began one summer while swimming at Bondi Beach in his hometown of Sydney, Australia. 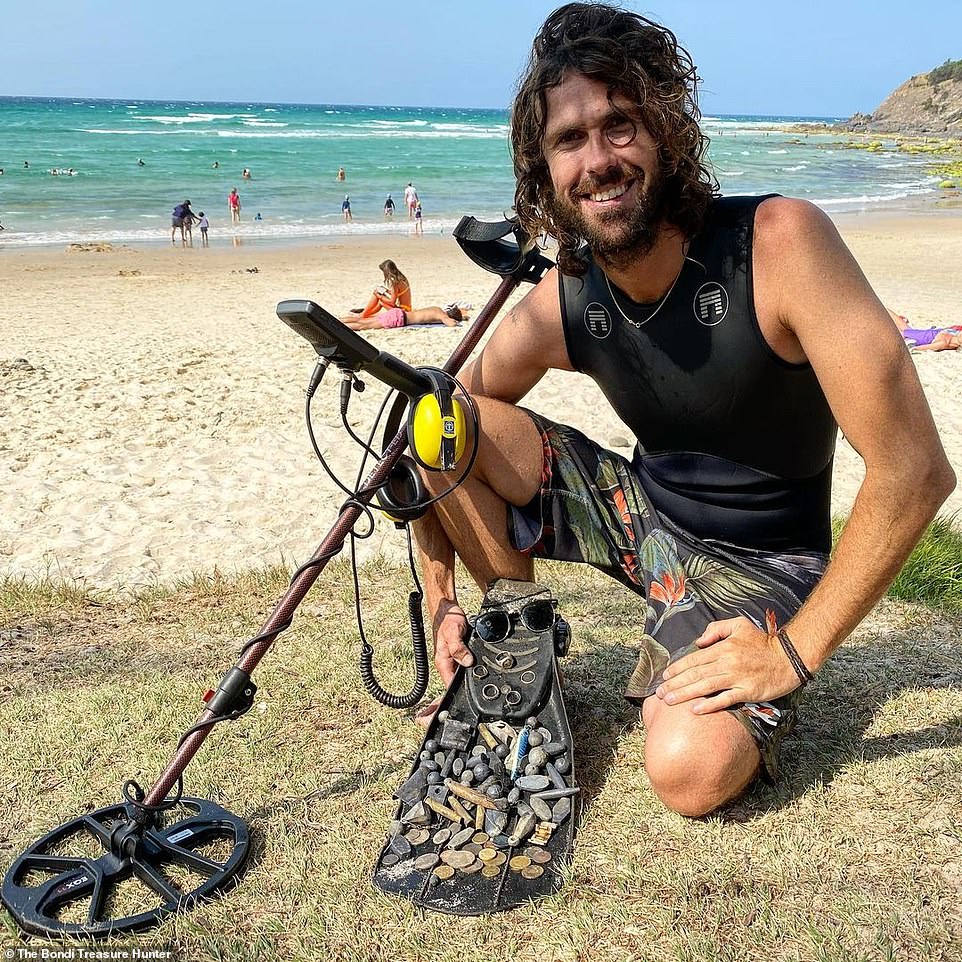 Leigh Webber, 40, from Sydney, discovered his passion for treasure hunting while swimming at Bondi Beach and finding a pile of coins on the seafloor. Pictured, the avid treasure hunter with a flipper full of treasure, including three gold rings 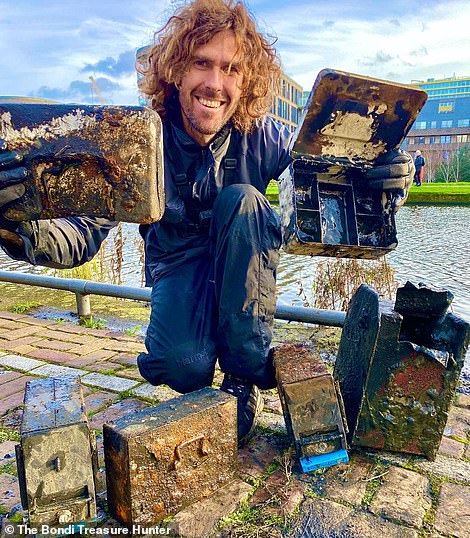 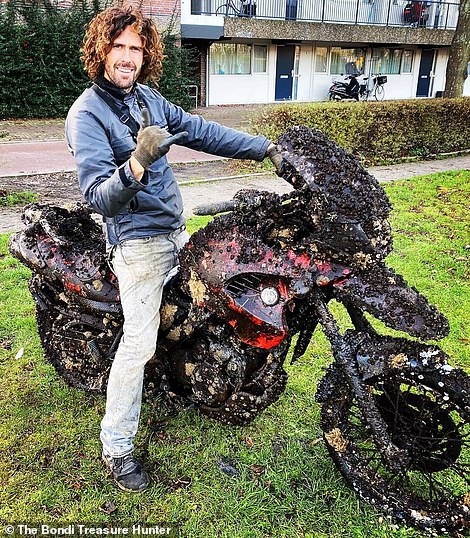 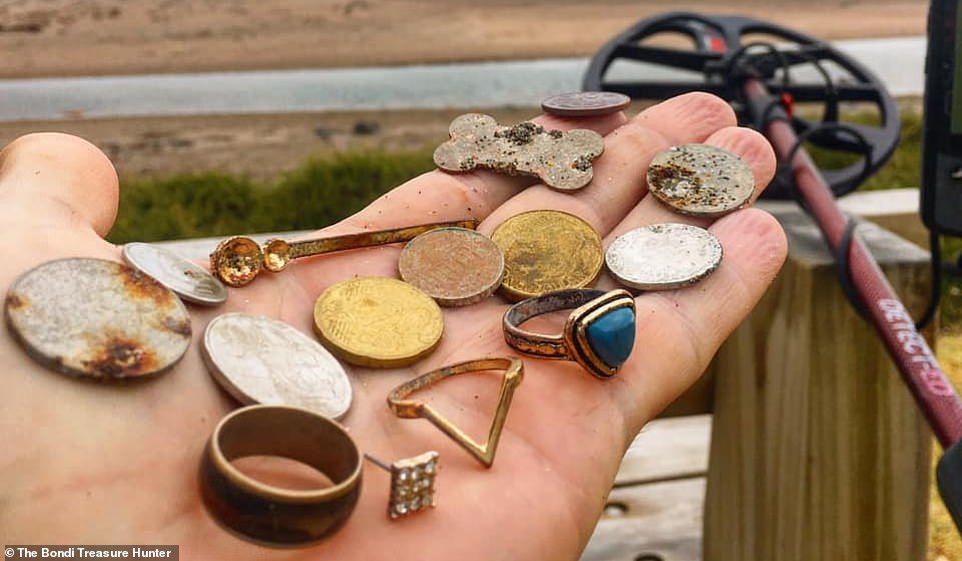 A collection of diamonds, rings and coins found in the sand at Hot Water Beach on New Zealand’s North Island 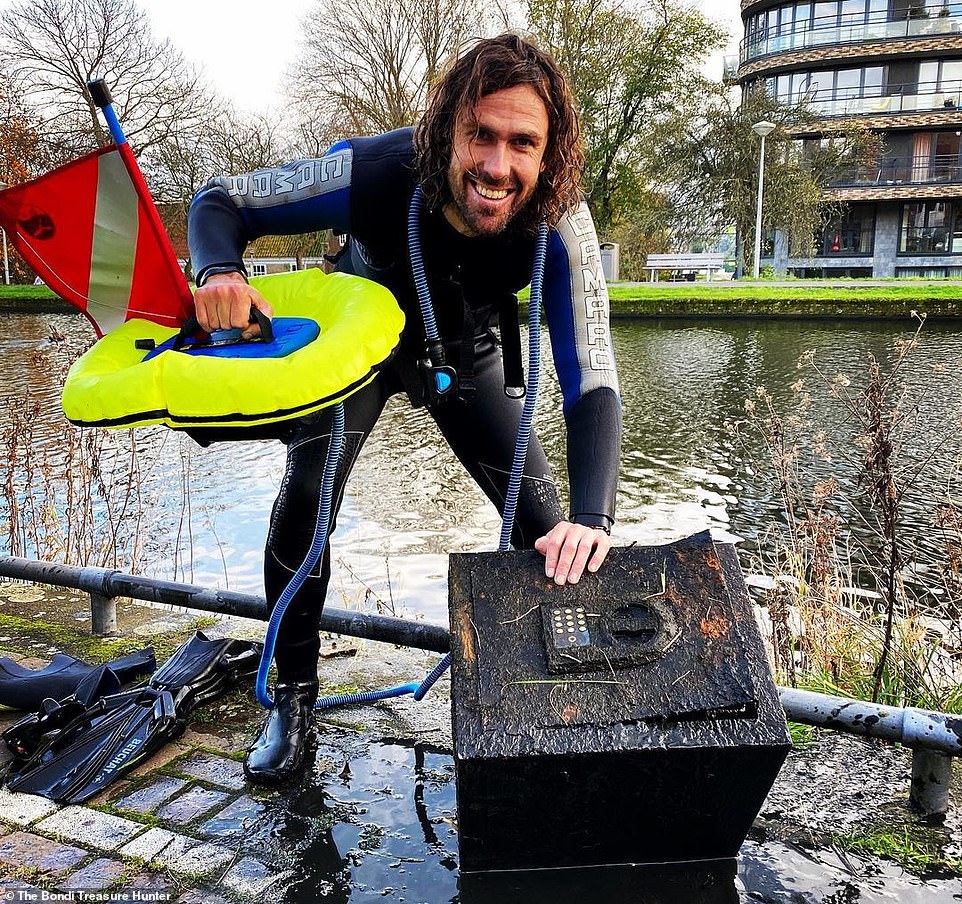 The 46th safe found by the Bondi Treasure Hunter in a canal. This one was discovered scuba diving with a tankless dive system

‘I’m a surfer. I grew up surfing and even on the flat days I liked to be in the water,’ he told MailOnline Travel.

‘On one of the flat days I went for a snorkel and in a spot where people jump in I noticed there were coins on the bottom of the seafloor.

‘I dusted away some sand and there were even more coins. I thought “oh my gosh” and a light went on – “I’m gonna get me an underwater metal detector”. I just started to get addicted as it was so much fun.

‘I noticed everyone around me was looking for fish and I was like “guys, you don’t know what you are missing!”‘ 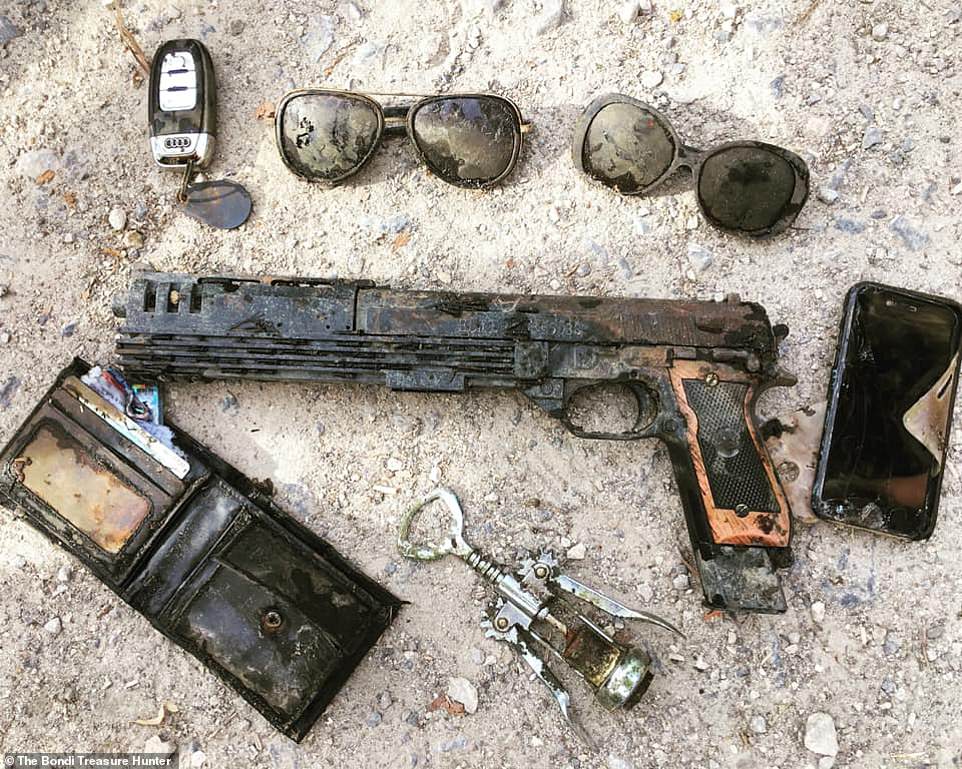 While diving in a river in Belgium, Webber found a large handgun, sunglasses and an Audi car key, among other items 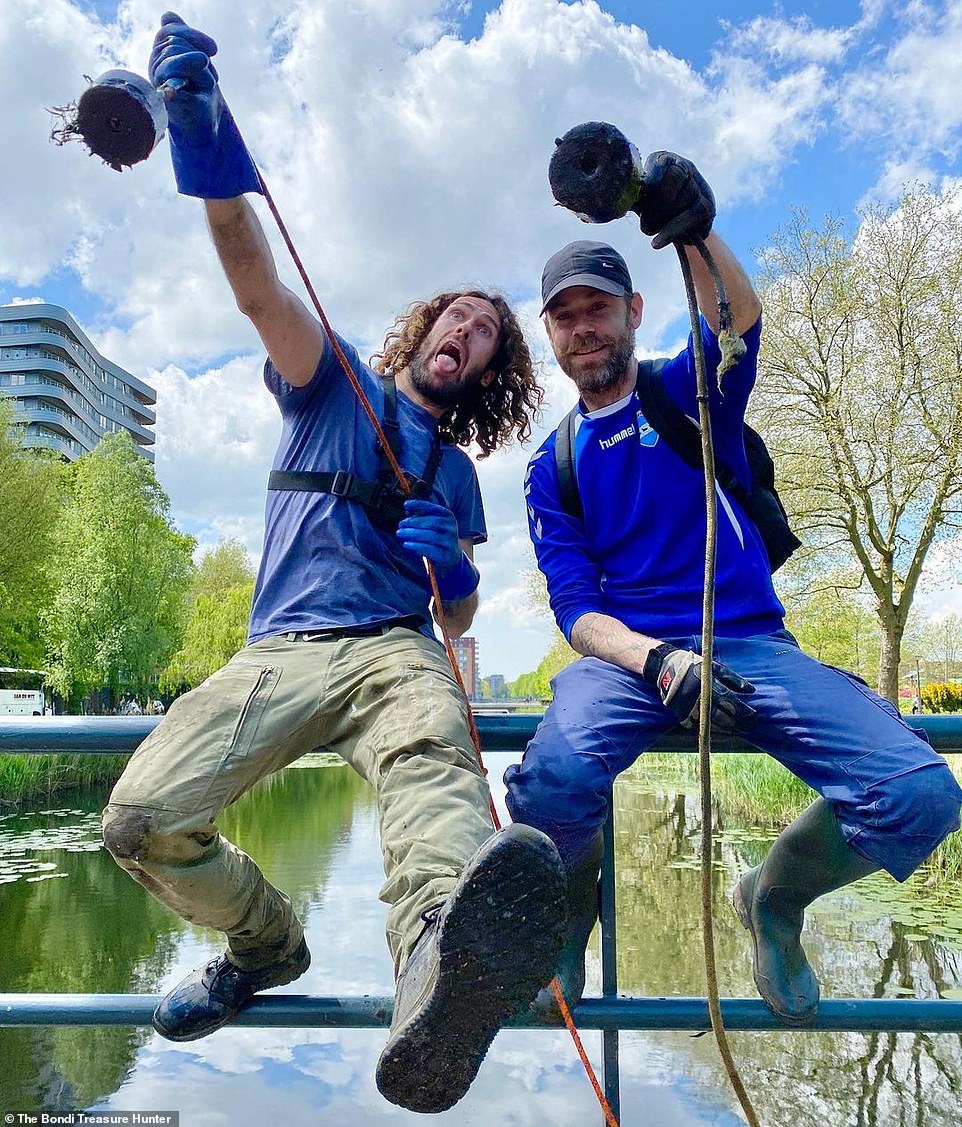 The Bondi Treasure Hunter, pictured, with his friend Dennis magnet fishing in Amsterdam. He snares items using magnets found in the back of speakers tied to a long rope 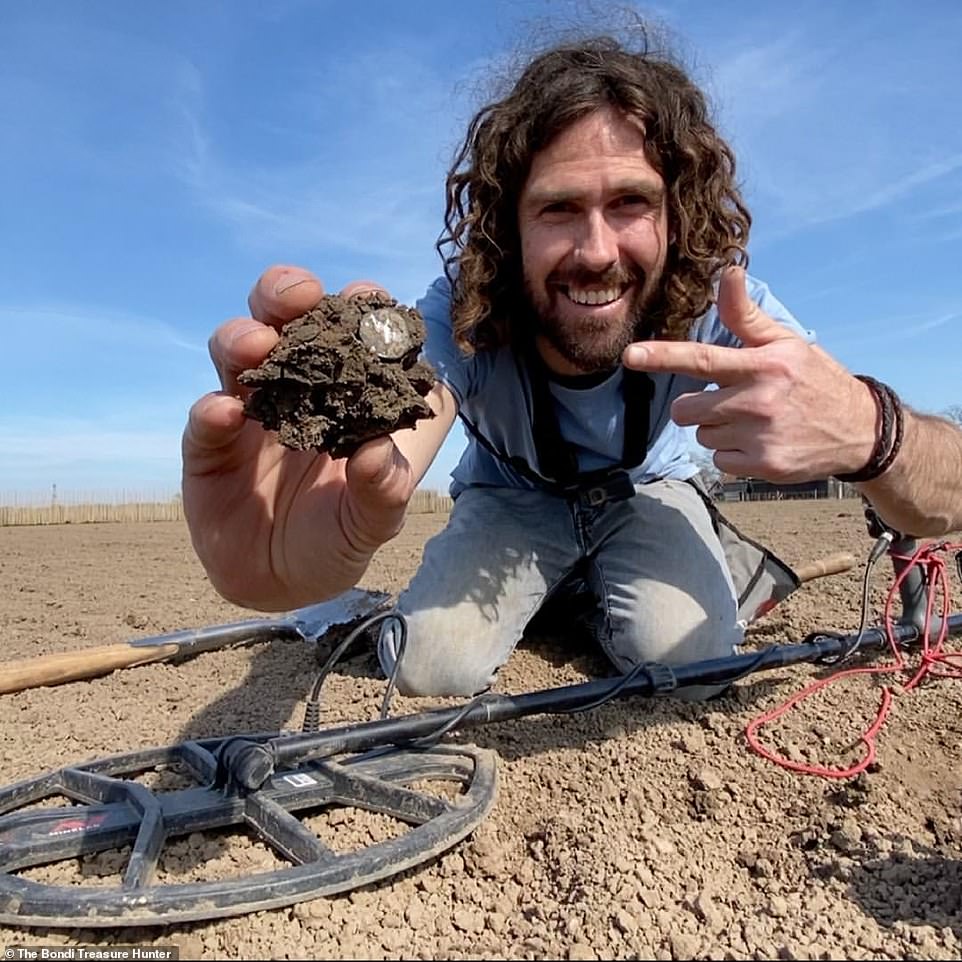 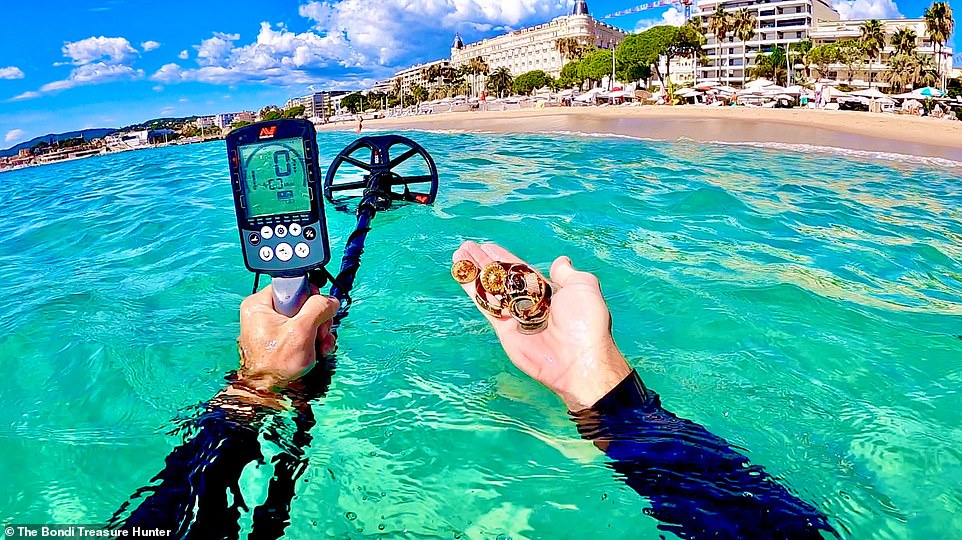 From that moment on Leigh was hooked, but he found it hard to meet other treasure hunters and learn the tricks of the trade.

Leigh said: ‘I wanted to meet people and other treasure hunters. Often I would send them a message or an email and they didn’t really have too much interest in meeting someone they didn’t know.

‘They didn’t want to share their spots, and so I thought “I’ll just make some videos and put them up on YouTube”. Then people can see me and hopefully I can meet some people and go treasure hunting together.’

And so the Bondi Treasure Hunter was born.

Once Leigh had exhausted the dirt of Australia, he took his newfound hobby to the next level – abroad.

Leigh said: ‘I’ve travelled through Spain, France, Australia and New Zealand. Also the Netherlands, Ibiza and Thailand. I’m currently building a campervan and my plan is to spend the summer travelling all around Europe looking for treasure.

‘I’ve been to England. England is fantastic. I usually go to the metal detecting festival there called “Detectival”, which is on every year. Two thousand metal detectorists camp out in the fields and we go metal detecting together.’

He has also spent time in London, mudlarking on the River Thames in search of treasure in the tidal flats. 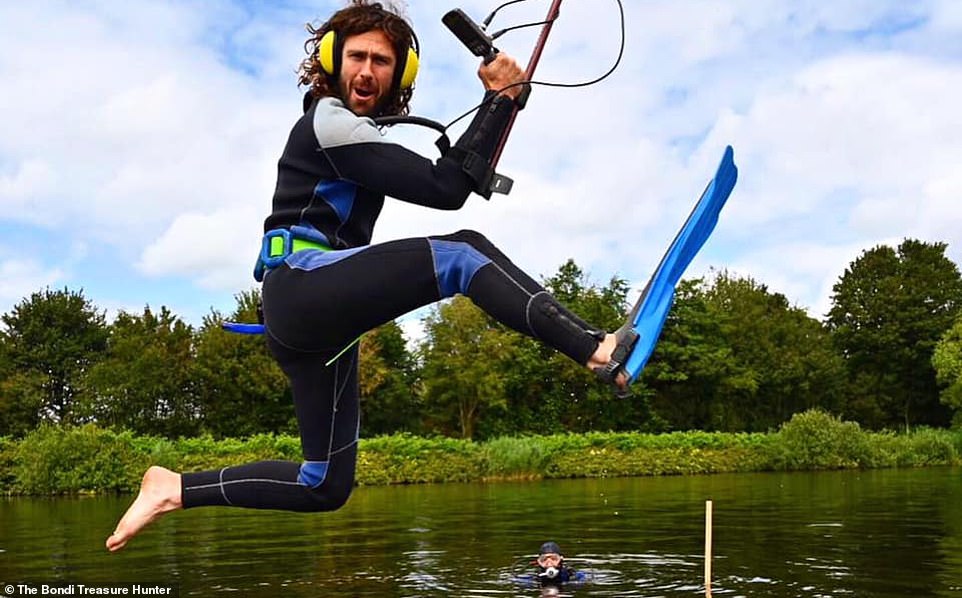 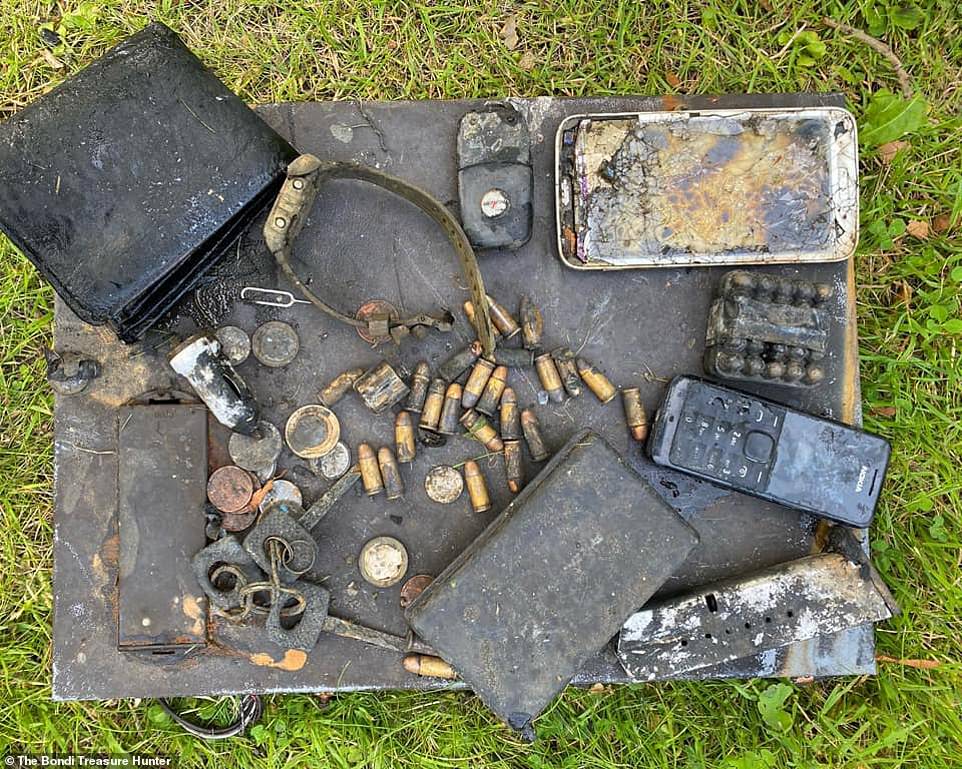 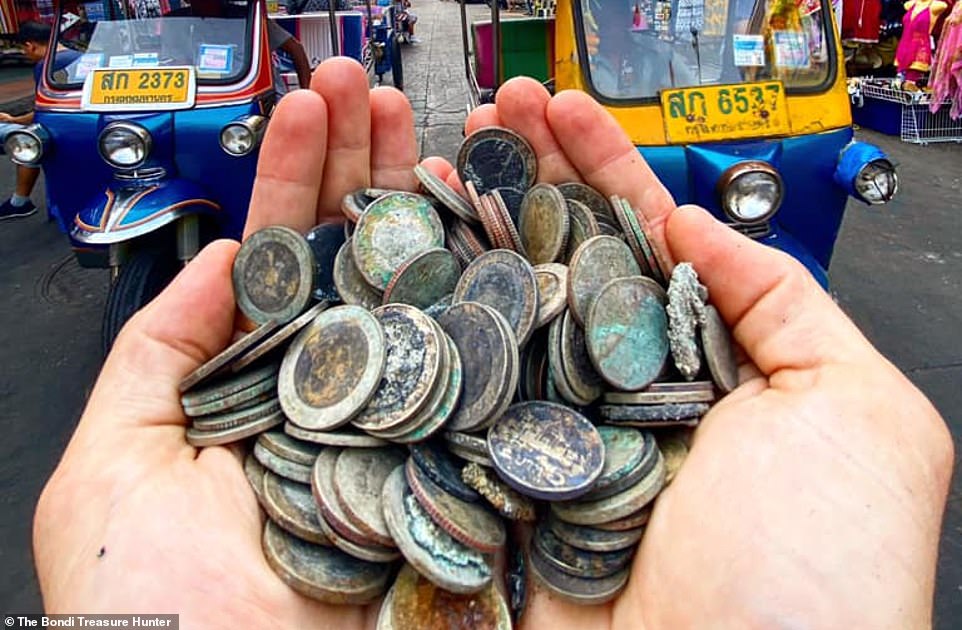 Hey big spender: The Bondi Treasure Hunter poses with handfuls of Thai Baht coins on Khao San Road in Bangkok, which he collected while travelling around Thailand 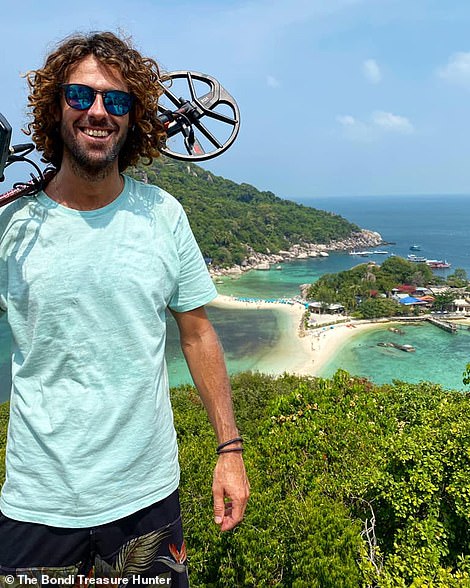 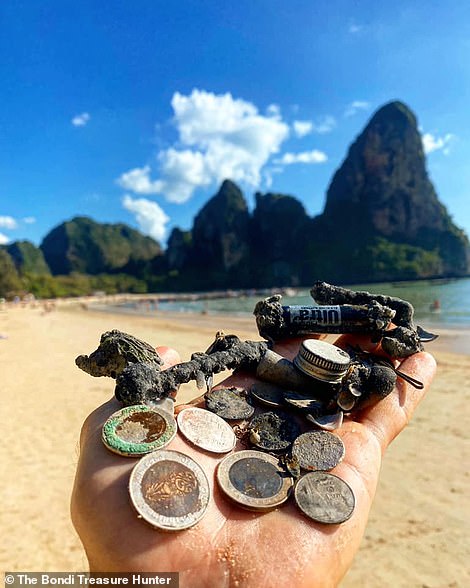 LEFT: Webber with his metal detector at Koh Nang Yuan viewpoint in Thailand. RIGHT: A handful of rubbish and coins worth next to nothing at a scenic location in Thailand

Most recently, Leigh has been in Amsterdam spending the majority of his lockdown magnet fishing in the old canals of the Dutch city.

Using magnets found in the back of speakers tied to a long rope, Leigh has caught all sorts of lost treasures, including handguns and bullets, which were handed over to the police, thousands of bicycles and even a BMW motorbike.

‘We threw some magnets in and got a safe and then another safe. I was just like “what is going on in this canal?”‘ he told MailOnline.

‘It was obviously a spot where some guys would dump all their safes after they’ve done their robberies around Amsterdam. We found up to 50 safes in that canal.’

Leigh even went diving in the canal – and discovered a huge safe full of memorial coins. They had to hire a crane to get the safe out.

Leigh keeps some of the treasure he finds, he gives other bits away and he also sells a lot.

Some of his favourite finds include a Rose Noble gold coin dating from the 1600s and gold posy rings from the 17th century. 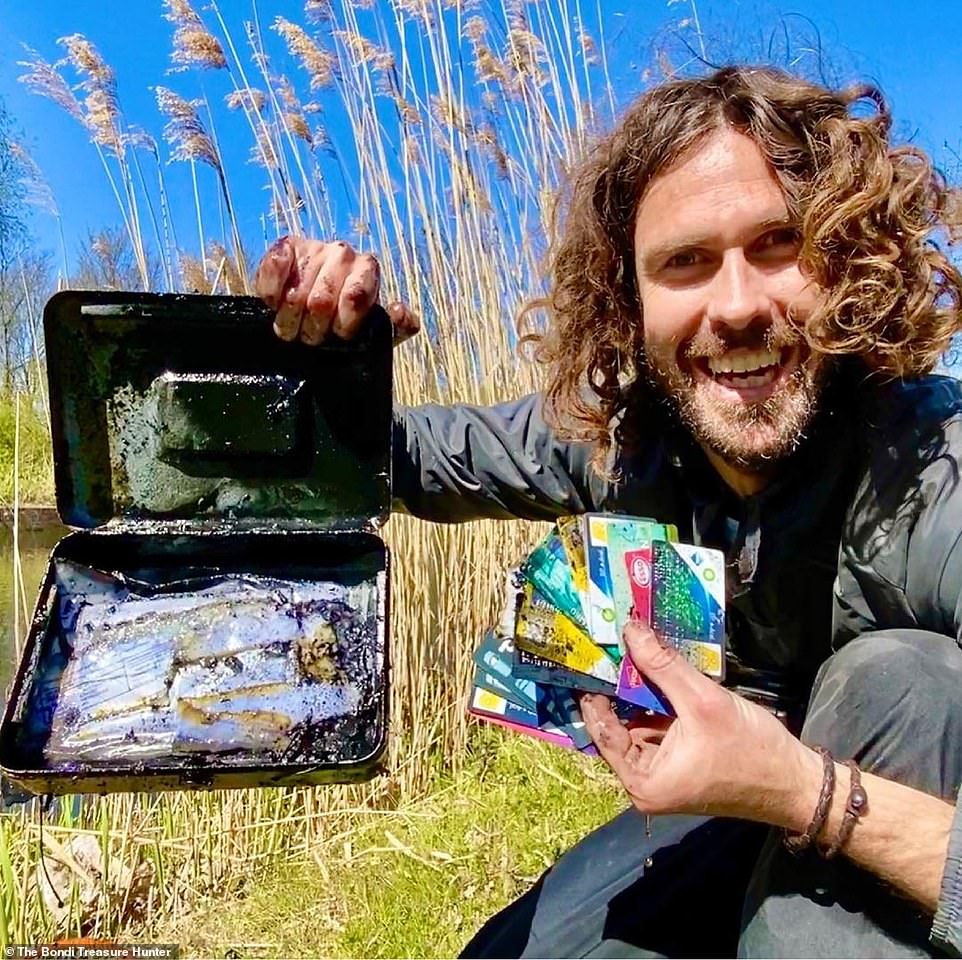 Webber once found two safes full of certificates, bank cards and car keys. He managed to track down the owner to return the stolen goods 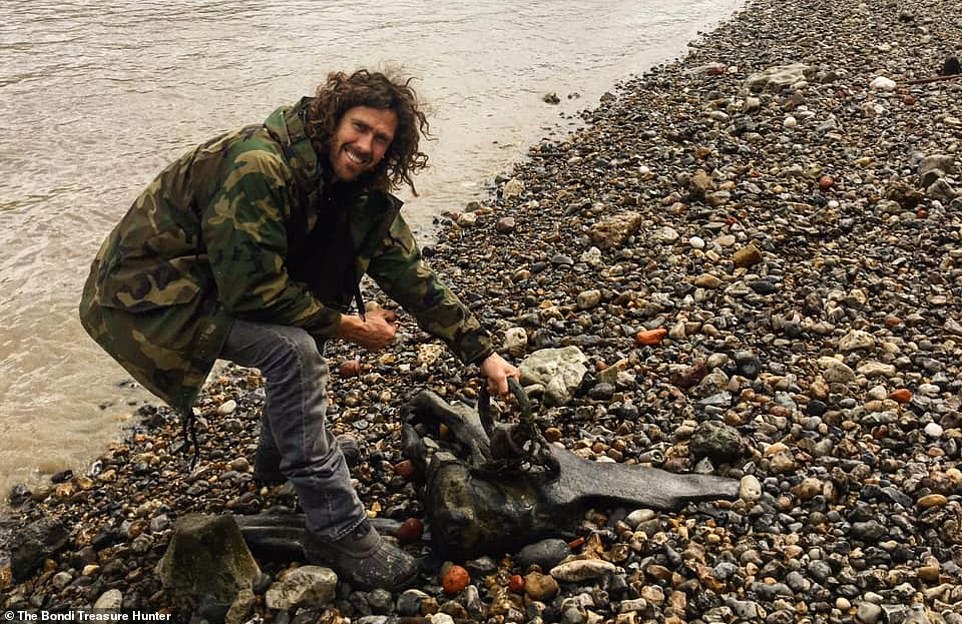 Mudlarking is a popular activity on the River Thames in London. Webber ventured to the British capital to see what treasures he could find in the tidal flats 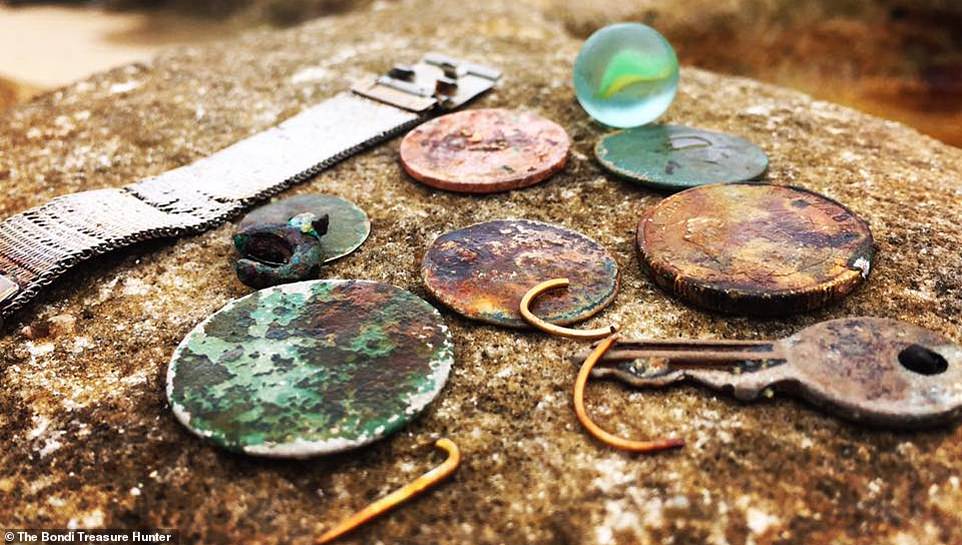 The treasure hunter keeps some of the things he finds, he gives other bits away and he also sells a lot 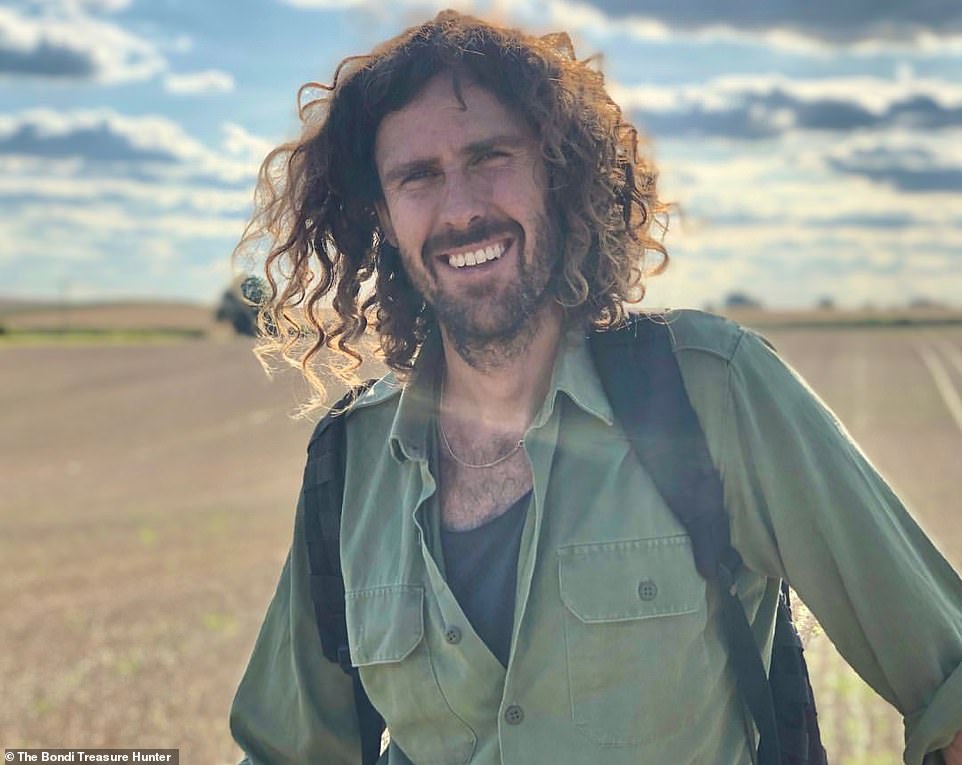 Webber pictured in the UK while on an expedition with Lisa Grace and Adam Staples, who unearthed 2,571 silver coins worth £5million in 2019

Leigh said: ‘I do love the square nails I find magnet fishing. You cook them in wax, boil them and it preserves the nails perfectly. They aren’t really worth anything but it creates a beautiful sculpture.’

For Leigh there is no other feeling on Earth like searching and finding hidden loot.

He told MailOnline: ‘Mate I get so excited! I remember one time I was out at Bondi underwater metal detecting and I was in this spot where the sand had been washed away and I knew there was some treasure there.

‘I just knew it and I wasn’t finding it. I said to myself “I’m not going in until I find some gold” and I was out there until it was bloody pitch-black, mate!