To infinity and beyond! Swimming pools have never been so glam – and here’s our guide to the ones that really make a splash

They have long been hotspots of glamour. For a start, everyone around them tends to be wearing less than they would in any other context.

Once you add in sunshine, a swaying palm or two and the chink of cocktail glasses, you have a recipe for pure pleasure.

While man-made swimming pools have been around since 3000 BC, hotels didn’t catch on to their guest-attracting appeal until the early 20th century. 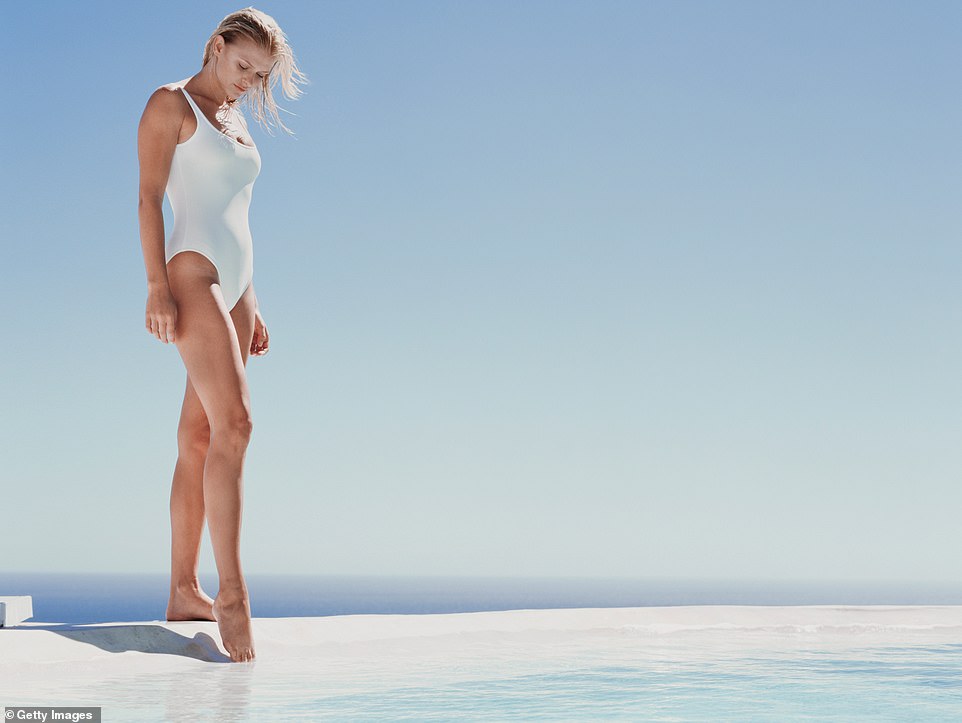 ‘The modern trend is for infinity pools where water flows over the side, giving the impression of the sea merging with the sky, writes Jeff Mills

One of the pioneers was hotelier Antoine Sella, who carved a pool out of the basalt rock at his Hotel du Cap-Eden-Roc on the French Riviera in 1914. It went on to be the inspiration for the hotel in F. Scott Fitzgerald’s Tender Is The Night, and attracted generations of writers and screen stars, from Ernest Hemingway and Elizabeth Taylor to Tom Cruise and Kendall Jenner.

The post-war years saw the height of the trend for movie stars such as Sophia Loren and Marilyn Monroe to pose in skimpy attire around a sun-dappled pool.

But these days nothing so conventional as a sunken rectangle of water will do. The modern trend is for infinity pools where water flows over the side, giving the impression of the sea merging with the sky.

This is particularly effective if your pool is on a cliff top, like the Belmond Hotel Caruso in Italy; or 57 floors up, as in the Marina Bay Sands Hotel in Singapore. 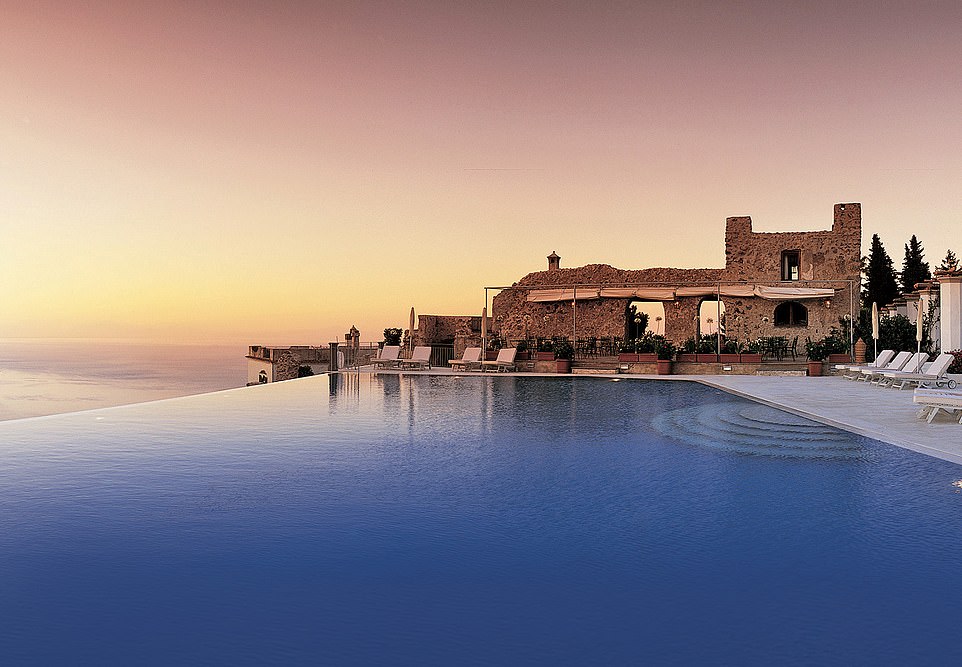 The 11th-century Belmond Hotel Caruso is located high above Ravello on Italy’s Amalfi coast. Formerly the palazzo-style home of a wealthy family, it has frescoed salons and arched stone vaults, but its infinity pool is perhaps its most striking feature.

Located 1,000 ft above sea level, with a sheer drop to the town below, it offers amazing views. If you’re short of a book, the pool concierge will bring you a Kindle with a selection of reading material along with your fresh fruit appetiser — plus an Evian vaporiser to keep you cool.

Who will you meet? People who can afford nearly £700 a room.

Swim in the sky 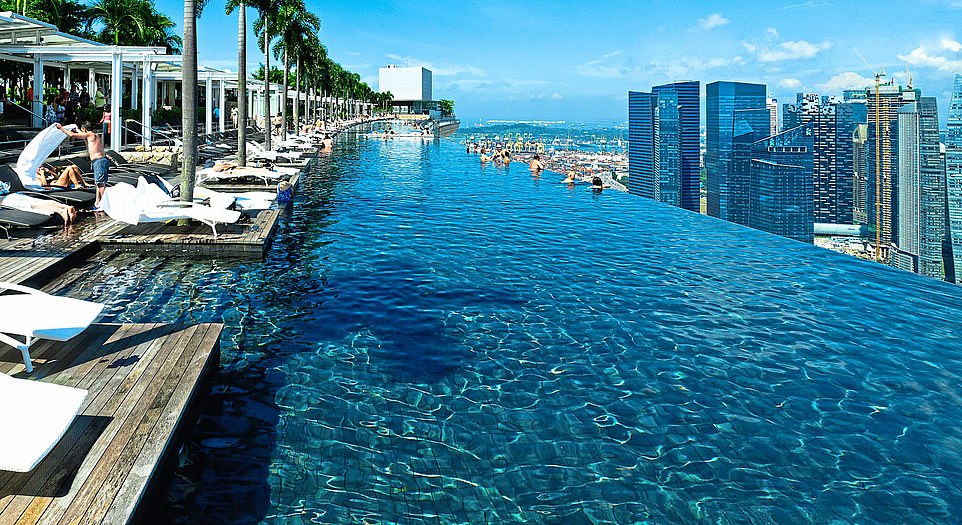 Set 57 storeys above the ground, the spectacular infinity pool that spans the tops of the trio of towers that make up the 2,561-room Marina Bay Sands hotel and casino in the heart of Singapore is the world’s highest rooftop pool. At 150 metres, it is definitely the longest.

Who will you meet? Asia’s top business people taking time off. 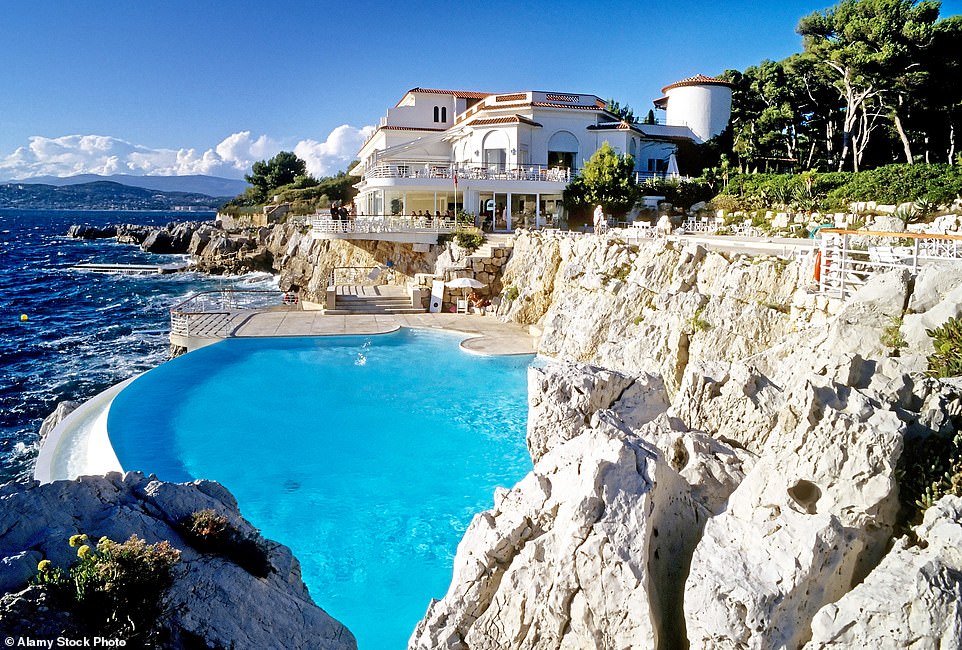 Perched on a rocky ridge overlooking the Mediterranean at the southern tip of Cap d’Antibes is the iconic infinity pool of the famed Hotel du Cap-Eden-Roc. It offers spectacular views right along the French Riviera from Juan-les-Pins across to the Iles de Lerins off the coast at Cannes.

The hotel’s head attendant will provide swimming lessons. Otherwise, grab a sunbed (or hire a cabana) and summon one of the fleet of waiters on hand to ferry an endless array of cocktails.

Some say it’s the biggest celebrity magnet on the Cote d’Azur. Certainly the likes of F. Scott Fitzgerald, Ernest Hemingway, Elizabeth Taylor and Rita Hayworth all loved it.

Who will you meet? The European and American jet-set, plus a few Russians with girlfriends half their age.

How to do it: Doubles from £700 (oetkercollection.com). 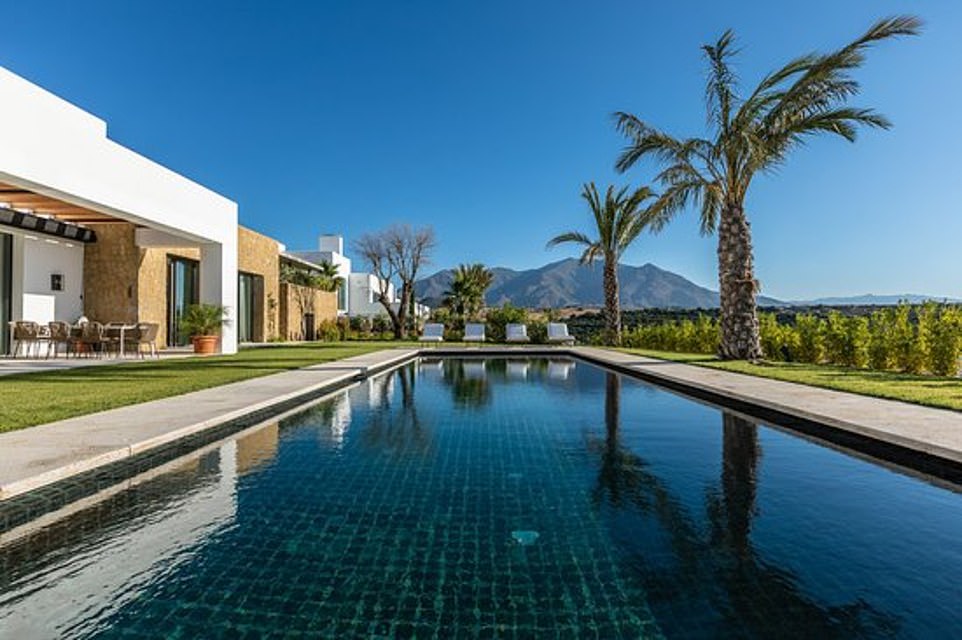 Finca Cortesin in Andalucia has four pools spread across its gardens, spa and beach club

There are not one but four pools at the 67-suite Finca Cortesin in Andalucia, Spain. Two are set in its beautifully-manicured gardens, one of them 35 metres in length and the other 50 metres-plus. There is also a 25 -metre seawater pool in the spa. But perhaps the most spectacular is a 25-metre infinity pool at the Finca’s beach club.

Who will you meet? The super-yacht crowd up from Puerto Banus, about 30 minutes away.

How to do it: Doubles from £730. Pools are restricted to hotel guests except for the one at the beach club, where day passes cost £54 (low season) and £77 (July and August), inclusive of lounger, towels, locker, water and fresh fruit (fincacortesin.com).

Laps in the city 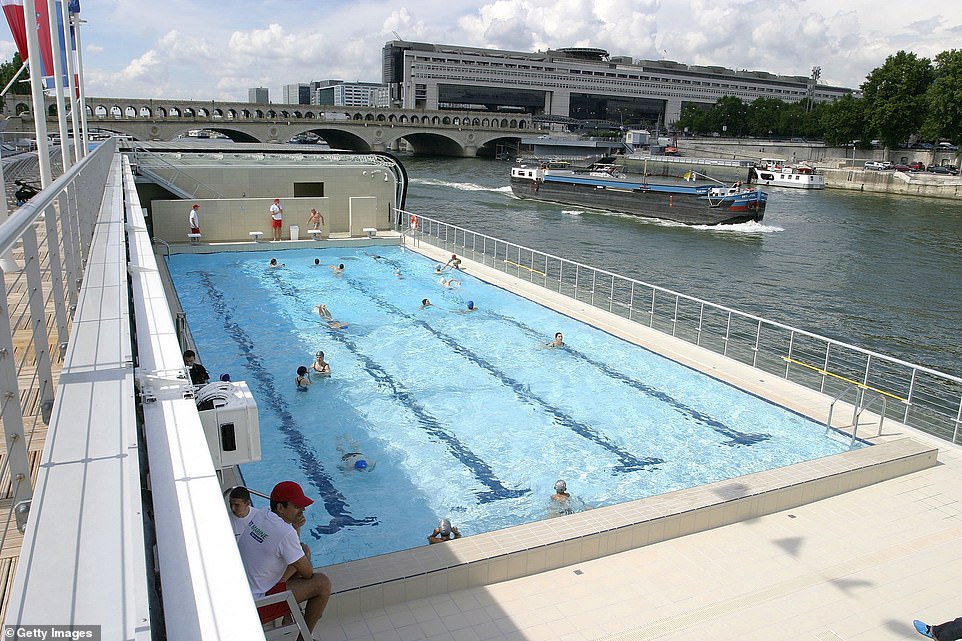 In the deep end: Piscine Josephine Baker is located on the left bank of the River Seine at Quai Francois Mauriac

If you fancy a dip in the heart of Paris this summer, look no further than the Piscine Josephine Baker. Named after the exotic dancer-turned-Resistance heroine, it is a pool set aboard a huge barge moored on the left bank of the River Seine at Quai Francois Mauriac.

It’s really a pool for swimmers doing 25 -metre lengths in each of the four lanes, but there’s a large sun terrace under a glass roof if you prefer to relax and take in the views.

Who will you meet? Fitness fanatics, but plenty of Parisian sun worshippers, too. 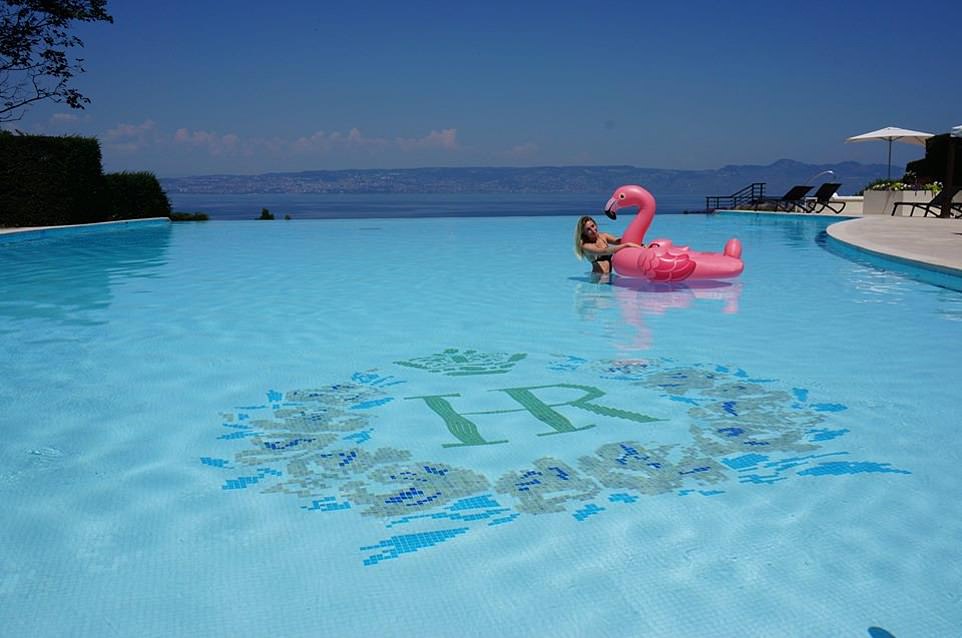 To infinity and beyond: Views from Hotel Royal’s pool on the French side of Lake Geneva stretch as far as the eye can see

Situated on the French side of Lake Geneva, the Hotel Royal, Evian, has a super-stylish infinity pool where you can spend lazy days gazing at the views over the lake, which stretch as far as Lausanne in Switzerland on the opposite shore.

Who will you meet? Bankers, industrialists and those keen on others who prefer discretion. 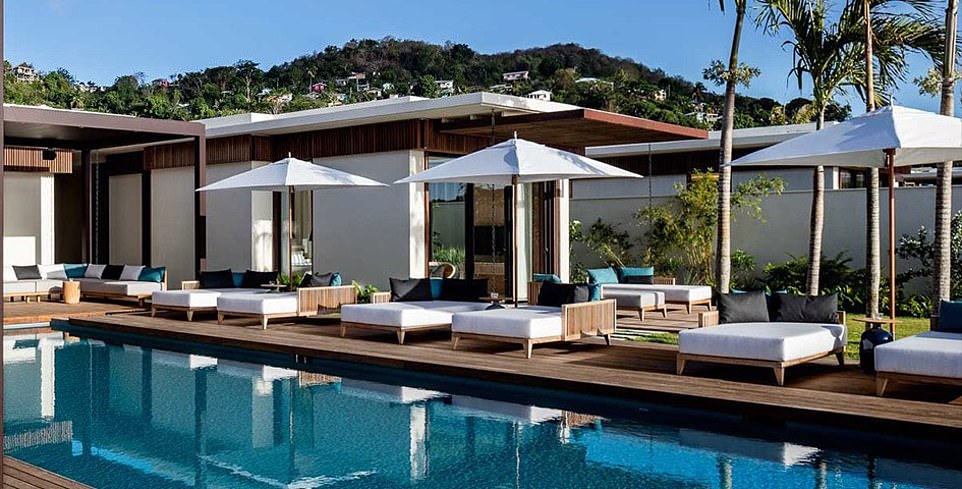 Impressive: At 100 metres, the swimming pool at Silversands in Grenada is the longest in the Caribbean

This pool is the star attraction at Silversands, a 43-suite resort on Grenada which opened at the end of last year. At 100 metres, it’s the longest in the Caribbean.

It runs from the hotel towards the white sands of Grand Anse Beach. Aside from the pool, Silversands is a sleek but relaxed retreat, from the Caribbean cigar and rum bar to restaurants serving sustainable island cuisine.

Who will you meet? Well-heeled movers and shakers looking for an authentic Caribbean experience.

How to do it: Doubles from £710 (silversandsgrenada.com). 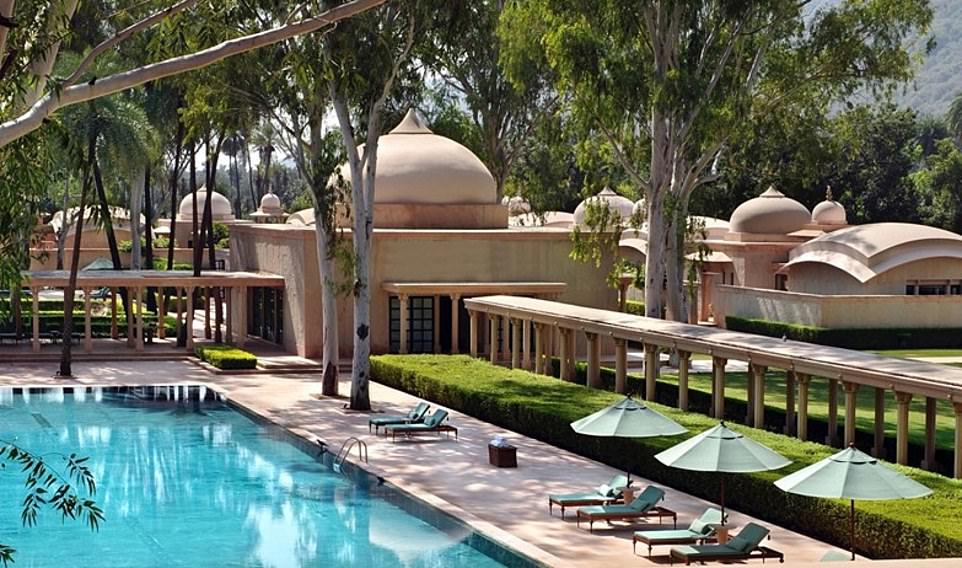 Like a large blue sapphire at the heart of the pink marble and sandstone Amanbagh resort in India’s Rajasthan, this 33-metre pool comes complete with comfortable sunbeds and attentive waiter service. The perfect hideaway after tiger-spotting in Rajasthan’s Sariska National Park.

Who will you meet? Discerning travellers happy to make a detour from the Golden Triangle.

How to do it: Doubles from £355 (aman.com/resorts/amanbagh). 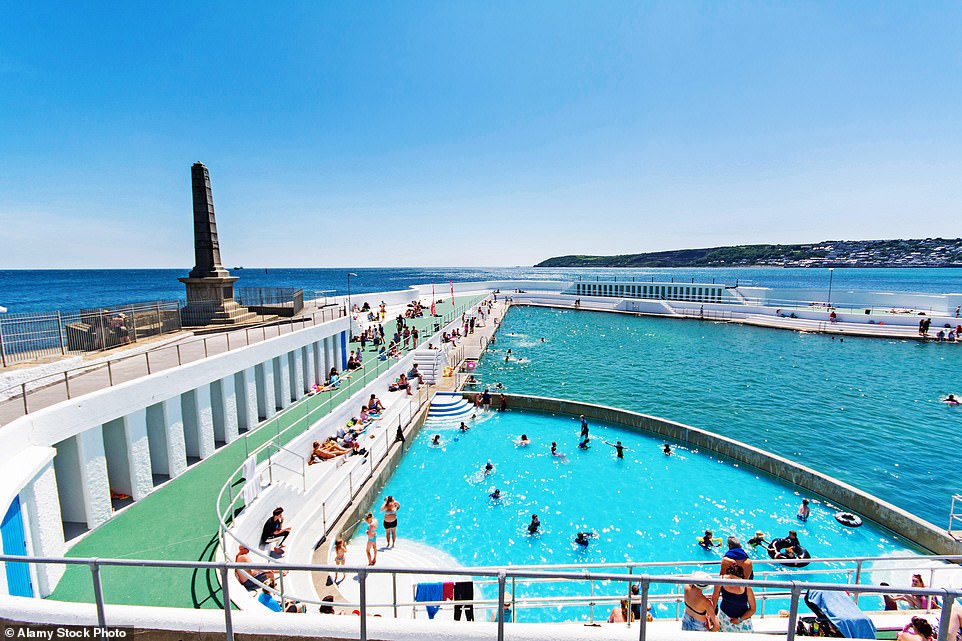 The Jubilee Pool, Cornwall’s celebrated Art Deco lido, is a much-loved saltwater pool on Penzance’s promenade that has undergone a £1.8 million refurbishment. The pool opens this weekend. It has sun terraces providing views over to St Michael’s Mount and across Mount’s Bay to Newlyn.

The other great attraction is the cafe with a covered seating area, which provides home-cooked delights such as sausage rolls, Cornish bacon and free-range eggs and chocolate brownies.

Who will you meet? Local parents and children, and fitness fanatics. 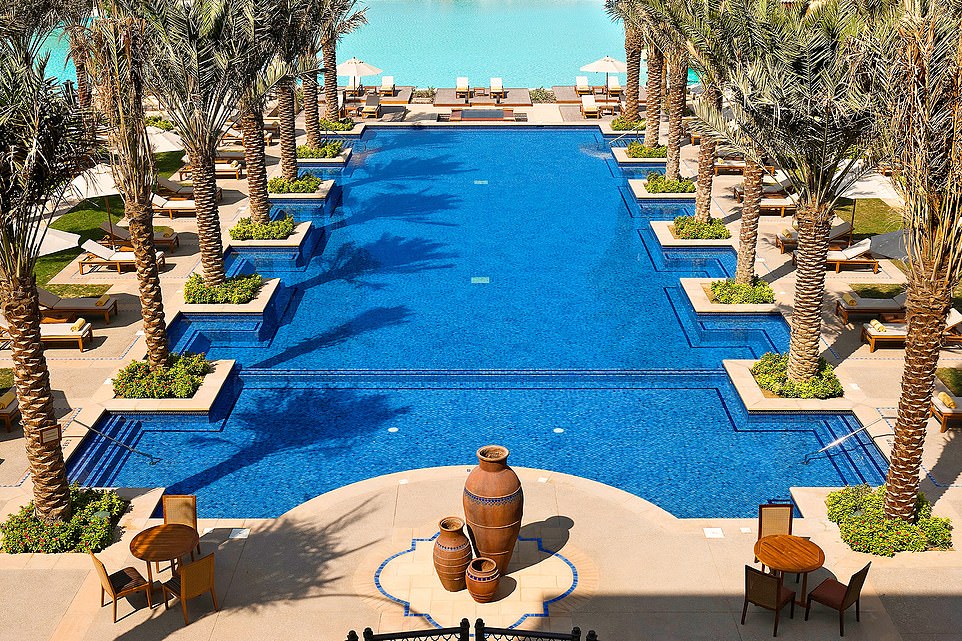 Dubai does glitz and glamour like nowhere else, and if anything epitomises that tradition, it is the pool at Palace Downtown. Surrounded by palm trees, it has its own air-conditioned cabanas, dozens of sun loungers and a great view of the Burj Khalifa and Dubai fountains.

Who will you meet? Expats and Australians having a stopover on their way home.