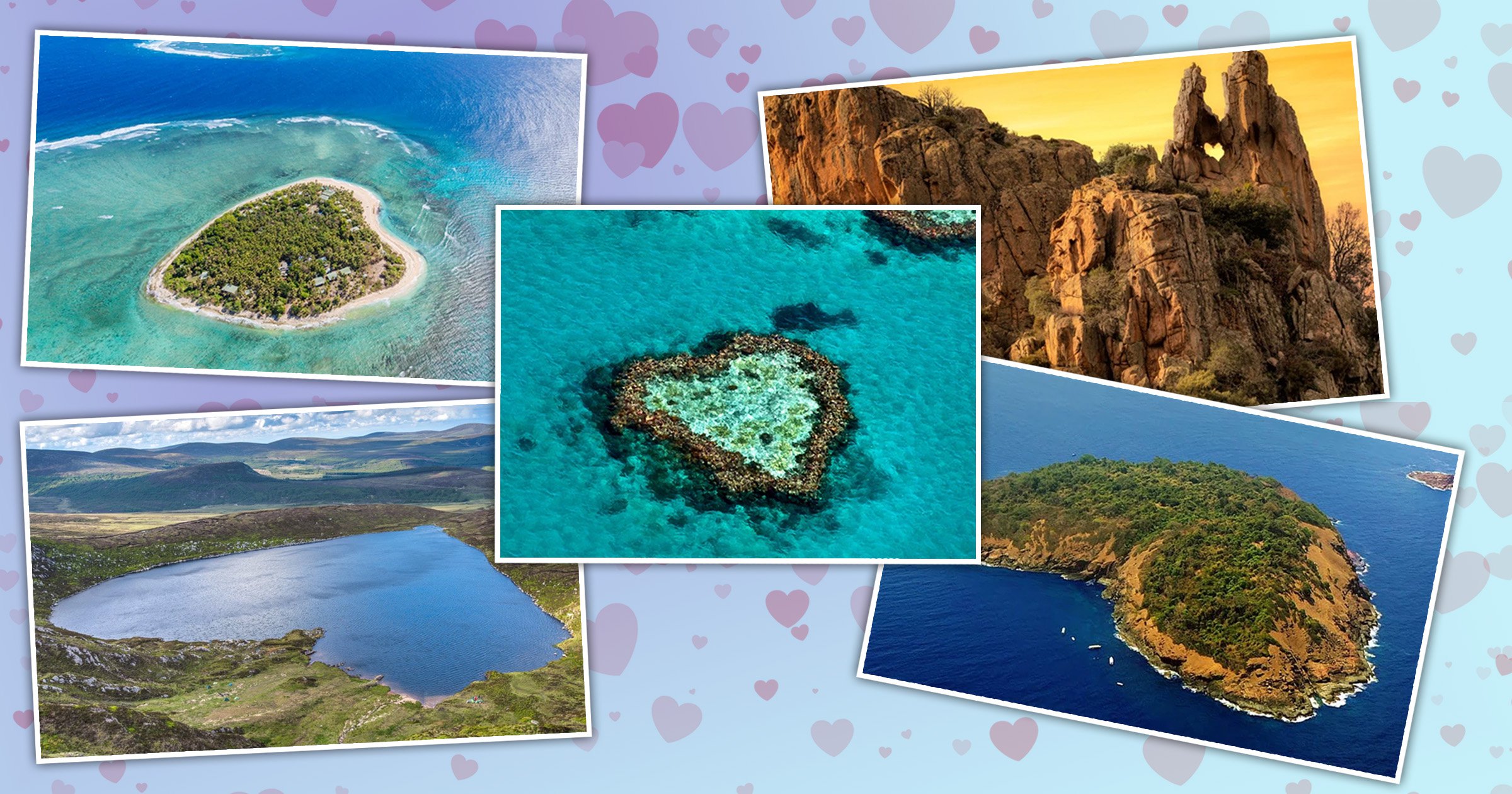 With Valentine’s Day just around the corner, even Mother Nature has been getting all romantic.

While you might not to be able to see them right now, anyone passionate about travel is guaranteed to be left lovestruck by these natural wonders.

From tropical islands to lovely loughs, this list of heart-shaped places proves that love really is all around.

Corsica’s west coast contains a geological wonder. Reddish-brown in hue, the Calanques de Piana are an otherworldly series of spiky cliffs and pinnacles soaring up to 300m in height.

Driving north, this quirky spectacle is visible soon after the village of Piana, following a distinctive Z-shaped double bend.

The jungly – and, happily, mosquito-free – island boasts an all-beach fringe between vibrant coral reefs and swaying palms. Even so, it actually delights surfers as much as snoggers thanks to the existence of eight separate breaks.

Though focusing on surfing, Tavarua’s lone all-inclusive resort also lays on paddleboarding, diving, kayaking and tennis, not to mention hardwood beachside cabins, a spa, a pool and good food.

From £2,774pp for seven nights’ full board, including transfers from Los Angeles.

In the wild Wicklow Mountains south of Dublin, Lough Ouler’s beauty has to be earned. Inaccessible by road, the lake hovers below Tonelagee mountain, whose name translates from the Gaelic for ‘arse to the wind’.

Such rough humour matches the uneven, muddy terrain which, combined with an ascent of Tonelagee’s 817m summit and the frequent absence of clear paths, toughens four-and-a-half-mile Ouler hiking loops.

Yet the rewards are ample: views as far as Snowdonia, blooming purple heather in summer and that hauntingly silent water.

Chiefly inhabited by pigeons and wild goats, Netrani is an Arabian Sea speck 12 miles west of mainland Karnataka. Despite the absence of human settlements, the island has an established scuba-diving scene.

This is thanks to Netrani’s colourful coral reef, which supports such critters as triggerfish, turtles, barracudas, rays and eels, along with occasional orcas or whale sharks. Visibility is excellent.

From October to May, the Padi-registered Netrani Adventures runs boat trips from the temple town of Murdeshwar, with one instructor per guest and about three hours on site.

From £35pp including equipment and snacks.

As such, helicopter tours off the Queensland coast are the best bet. After flying over the 55ft reef, you’ll sail around it on a glass-bottomed boat and then snorkel in an adjacent lagoon.

The three-hour outings start from the nearby rainforested Whitsunday Islands, whose eco resorts and pristine beaches also stoke romantic fires.

While it’s dubious whether St Paul’s Bay is strictly heart-like in form – its northern flanks afford the most convincing perspective – there’s no disputing this small cove’s charm.

On the island of Rhodes’ south-eastern coast, it’s a naturally walled inlet with a sandy beach beside gentle and warm waters ripe for families or snorkellers. Try to arrive by 10am in peak season, though, while sunbeds and parasols remain available.

The bay’s name refers to a supposed evangelical visit to this Dodecanese island by St Paul in AD51 – commemorated today by a pretty hillside church.

Where to find three romantic addresses in the UK

Just south of Dartmoor, Truelove is an ancient farm converted in 1998 into spacious barn accommodation. Its local hedgerow-lined lanes and rolling country are decidedly romantic.

Say it aloud! On north-western Scotland’s Loch Ewe, this two-mile-long isle is home to a single family. Ask Aultbea’s Ewe Canoe for a guided paddle around it.