Tickets for Virgin Atlantic’s new Heathrow to New York Airbus A350 service, which features a ‘social space’ with sofas called ‘The Loft’, are now on sale from £279

Tickets for Virgin Atlantic’s new Airbus A350 services are now on sale, with the first flight to take place in September, to New York.

The aircraft features a transformed cabin that boasts brand new business class suites and a ‘social space’ for those forking out for the most expensive fares called ‘The Loft’.

The carrier operates bars on all its long-haul aircraft, but said that this is ‘the largest social space in the airline’s fleet’. 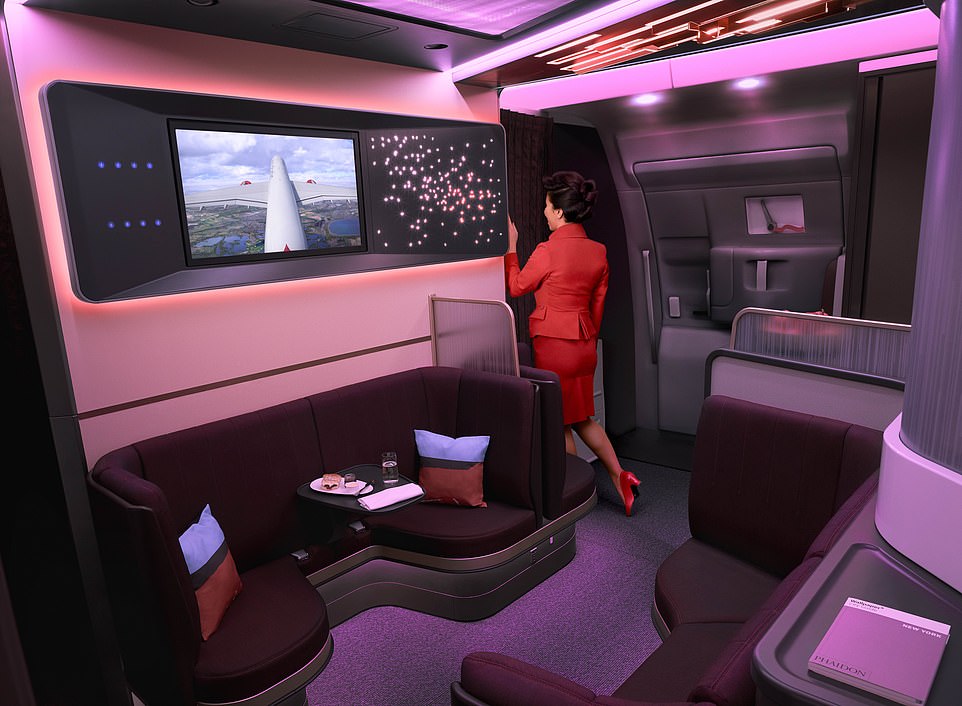 Passengers can relax here on sofas, work on the table or use the big-screen TV (32in) to watch a movie or views from the tailcam.

Here’s more on the innovation from a Virgin Atlantic statement: ‘As the first airline to introduce an on-board bar, Virgin Atlantic has taken its customer proposition to the next level.

‘The Loft is designed for customers to gather, chat, enjoy a drink or dine with friends.

‘The Loft extends the airline’s world-renowned Clubhouse experience to the skies, offering a wide range of cocktails, and the option for customers to dine together and enjoy Mile High afternoon tea by Eric Lanlard and a selection of delicious new dishes by Donal Skehan.’

The aircraft’s first commercial service is expected to take place on September 10 from London Heathrow to New York JFK. 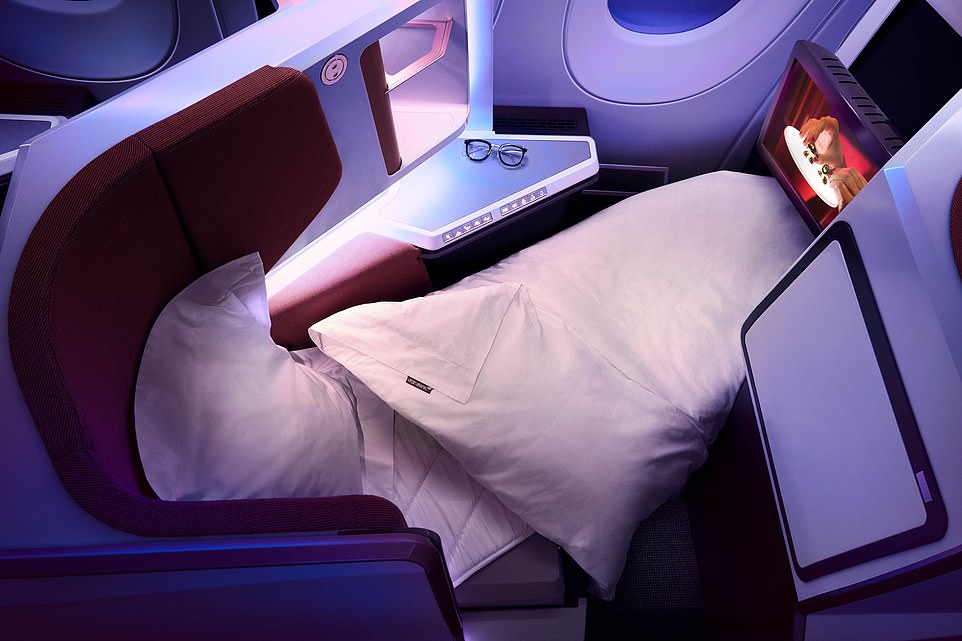 The new business class suites have deployable privacy dividers and 18.5in entertainment screens

Travellers can now book flights via the Virgin Atlantic website and contact centre from £279 return in economy, £773 in premium and £1,358 in upper class, which is what Virgin calls its business class section.

In the A350 upper class section the seats are laid out in a 1-2-1 configuration, with every seat facing towards a window.

And they all transition seamlessly from an upright seat straight to a bed, which is bigger, too – 6ft 8.3in, up from 6ft 7.5in.

In addition, all the seats have deployable privacy screens.

The in-flight entertainment screen, meanwhile, has been boosted to 18.5inches – up from 10.1in on the 747 and 11in on the Dreamliner – and can be controlled by a personal device. 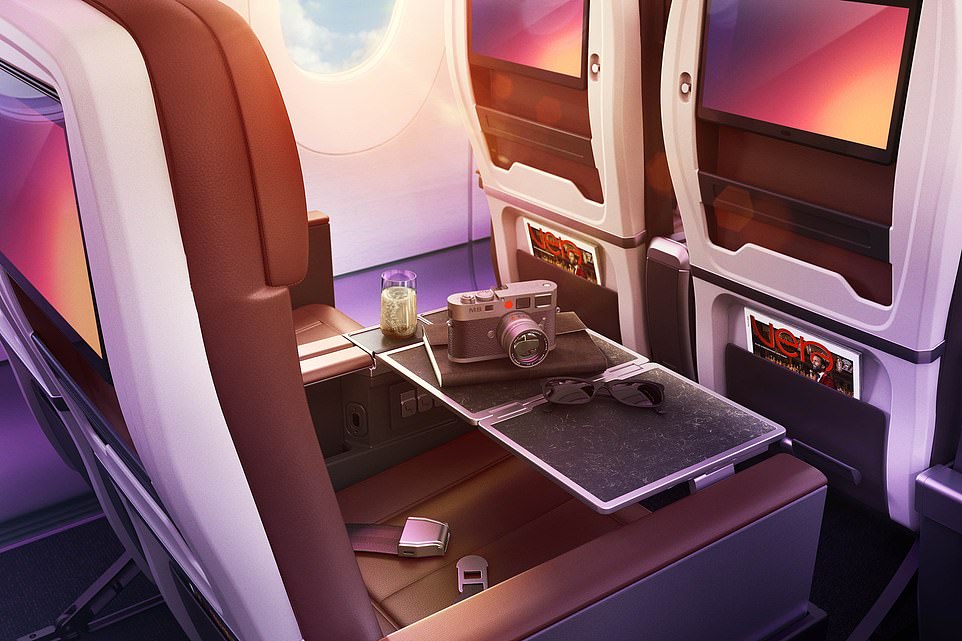 The screens in premium (pictured) and economy have been increased in size, up from nine to 10 inches (depending on the aircraft) to 13.3in in premium and 11.6in in economy

THE VIRGIN ATLANTIC A350 SCHEDULE

The introductory schedule is expected to be as follows:

Both flights will operate daily, except for Thursdays when the aircraft will be in planned maintenance.

VS138 JFK-LHR except Thursdays (from October 27, scheduled maintenance will switch to Tuesdays).

The screens in premium and economy have been increased in size, too, up from nine to 10 inches (depending on the aircraft) to 13.3in in premium and 11.6in in economy.

The entire aircraft will also have access to high-speed Wi-Fi.

The aircraft is powered by Rolls-Royce Trent XWB engines and is designed to be 30 per cent more fuel and carbon efficient than the aircraft it replaces.

They will be the first to feature Virgin’s new ‘flying icons’, set to replace the ‘flying ladies’ at the front of the fuselage. These new high flyers are a diverse range of men and women ‘representing modern Britain’.

Commenting on the new Virgin Atlantic upper class suite and new A350 layout, Rob Burgess, editor of frequent flyer website www.headforpoints.com, said: ‘Virgin Atlantic has grown up! I think the new upper class Suite is classy and smart and solves most of my problems with the current seat. You have more privacy, you have far more personal space, the IFE screen is much bigger, and you don’t need the help of the cabin crew to turn the seat into a bed.

‘Little tweaks like being able to use your phone to control the IFE and the adjustable suite mood lighting, as well as the simultaneous introduction of new bedding and toiletries, mean that the entire upper class experience should be transformed. There will also be Wi-Fi for the first time.

‘The Loft is a brave attempt at trying something new with an on-board social hub. Instead of a bar, you have a sofa where families can watch a big-screen TV together and a table where colleagues can sit and work. I have to admit that I’m intrigued to see if it takes off. 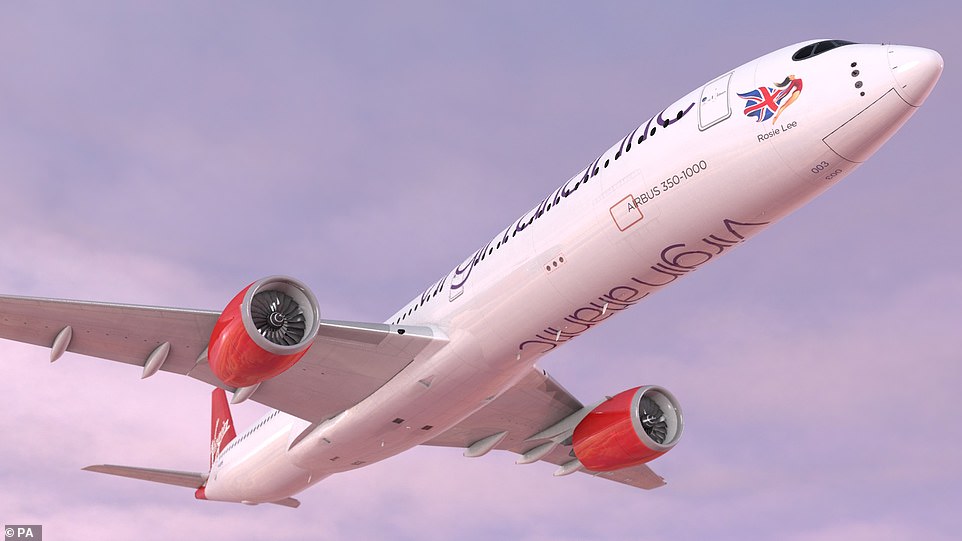 ‘The changes to the premium and economy cabins, whilst more modest in scope, show an attempt to create a more upmarket image. The premium seat, for example, is definitely the love-child of luxury car seats in terms of leather quality and stitching.’

Mark Anderson, Executive Vice President Customer at Virgin Atlantic, commented: ‘The introduction of our A350 represents a true evolution of our customer experience.’

The news today follows Virgin Atlantic’s recent announcement in June that it was to be the first UK airline to make a firm order for Airbus A330-900neos, 14 in total, with an additional six as options, reaffirming its commitment to ‘flying the cleanest, greenest fleet in the sky’.