AN invite to The World’s Most Magical Celebration, training to be a Jedi and landing the Millennium Falcon in Star Wars: Galaxy’s Edge is all in a day’s work for a ten-year-old at Walt Disney World Resort.

Here Ellie and her mum Liz tell The Sun how a Disney holiday with her family was packed with magical memories, and how she can’t wait to go back to help celebrate the resort’s 50th Anniversary… 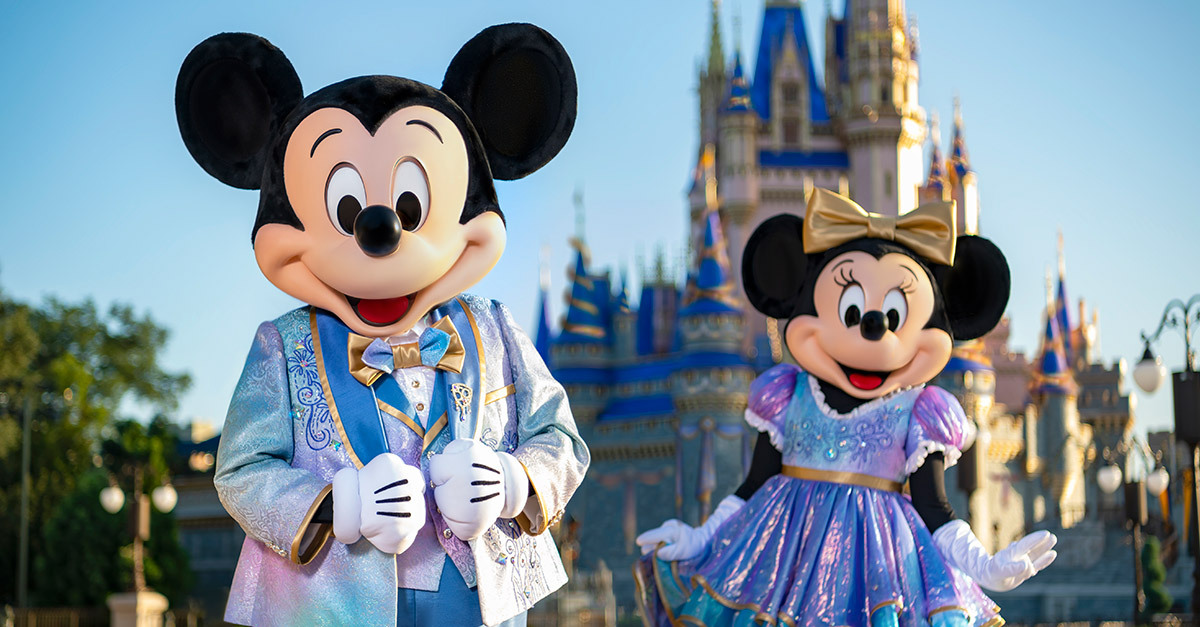 “I went to Walt Disney World Resort in Florida with my mum, dad and five-year-old sister Lily in 2019 and it was the best holiday ever!” says Ellie.

“We saw Cinderella Castle and spotted Characters all over the parks. We had a character breakfast at Chef Mickey’s restaurant and Mickey, Minnie and Goofy all popped in to see us. It was amazing, I'd seen them all on telly before, but it was so much better when they were right in front of me. They were giant – and really funny! We took loads of pictures with them. Mum has just said that we are going back in 2022 and I’ve already started planning all the things I want to do!”

In fact, it’s the perfect time for Ellie and her family to make a return visit as Walt Disney World Resort is celebrating its 50th Anniversary. The fun begins on October 1 and lasts for 18 months, making 2022 in particular one of the most memorable years ever.

For the celebration, the whole resort will be specially decorated, and light up with wonder, with Walt Disney World Theme Park icons transformed into Beacons of Magic. Cinderella Castle, Spaceship Earth, the Hollywood Tower Hotel and the Tree of Life will all shine like never before, radiating an enchanting glow. Mickey and Minnie are getting great new outfits to mark the occasion, and Cinderella Castle will be draped with special embellishments and decor, with a magnificent 50th Anniversary crest.

It’s good news for Ellie and her mum. They can’t wait to see all the new shows, attractions and events on offer this time around.

“Honestly, we’re so excited,” says Liz. “The best thing about a holiday to Walt Disney World Resort is that there’s something for everyone. Ellie’s favourite ride is the Haunted Mansion. It’s one of the original attractions at Magic Kingdom Park, from when it first opened back in 1971, but it’s still brilliant today.” 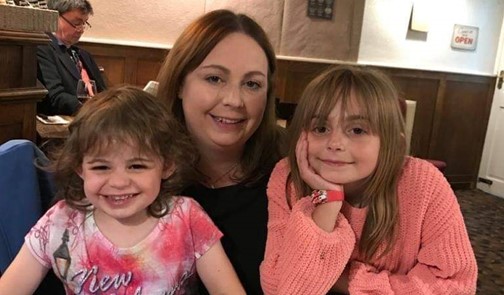 Adds Ellie: “Dad and me want to explore Star Wars: Galaxy’s Edge. Lily loved Toy Story Land the most. Mum’s a bit of a daredevil, so The Twilight Zone Tower of Terror was her favourite – she screamed her head off!”

As everyone knows, planning and looking forward to a Disney holiday is half the fun, so here’s Ellie and her family’s list of top attractions at Walt Disney World Resort they can’t wait to enjoy in 2022:

Seeing the Beacons of Magic

As well as exclusive experiences and special decorations for the 50th Anniversary, all four Walt Disney World Resort Theme Parks will light up with wonder as their icons are transformed into Beacons of Magic. This means each Theme Park will be illuminated, creating a magical EARidescent glow. “We just have no idea what to expect, but apparently Cinderella Castle is going to sparkle with pixie dust and we’d all love that,” says Liz. 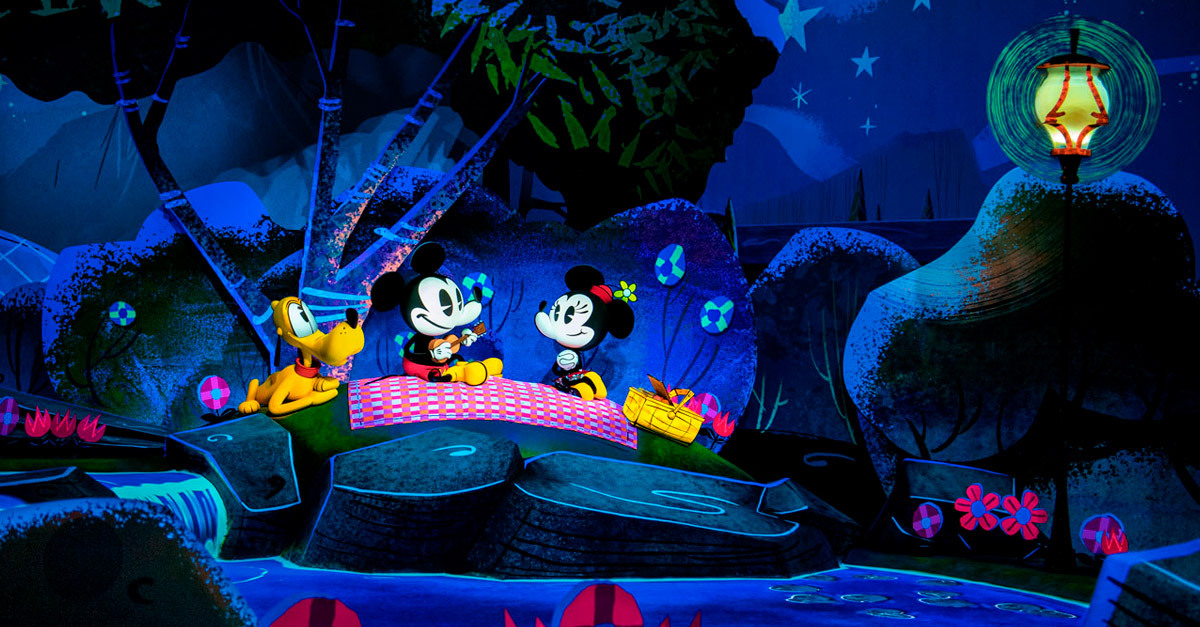 The new show across the World Showcase Lagoon at EPCOT is going to be the largest night time show ever seen at a Disney Park. HarmonioUS promises fountains dancing to Disney songs, with lasers and illuminations projected across the water. “It sounds amazing,” says Ellie. “I loved watching the fireworks last time and this is going to be even bigger and better.”

There will also be new rides to enjoy. Remy’s Ratatouille Adventure opens on October 1 in the French Pavilion at EPCOT, ready for the anniversary. It will be an amazing 4D adventure where visitors will feel like they have shrunk down to Chef Remy’s size. Disney’s Hollywood Studios also has a ride themed around Mickey Mouse called Mickey and Minnie’s Runaway Railway. “Any age or height can ride in the spinning cars,” explains Liz, “I’m excited to ride it with Lily.” 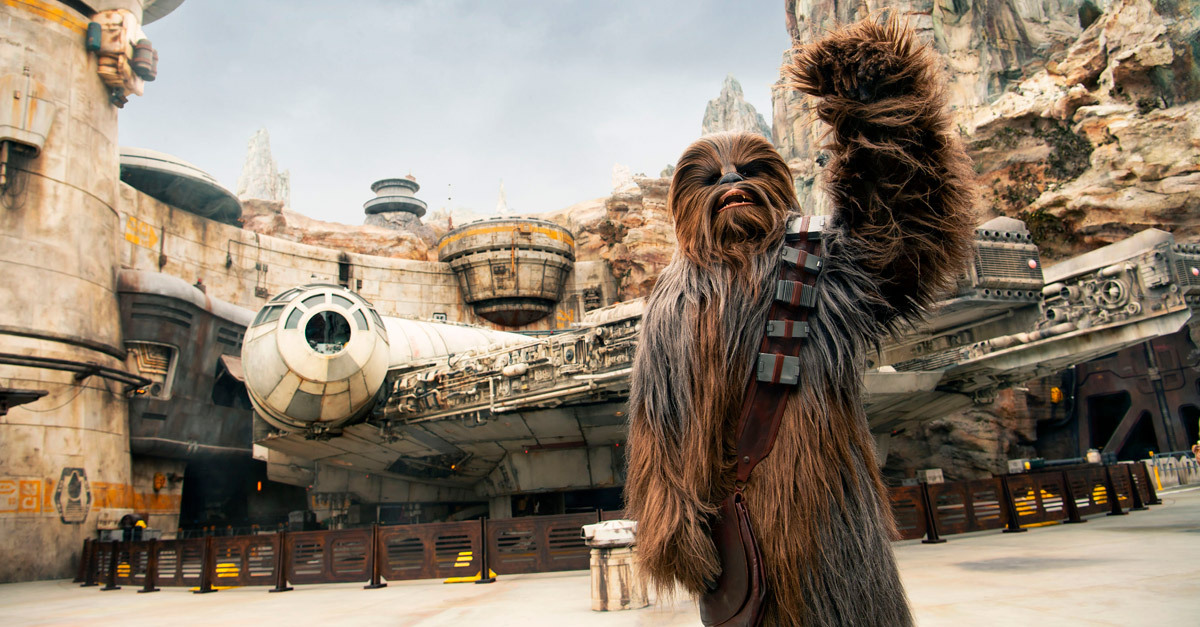 Says Ellie: “Last time we visited Disney’s Hollywood Studios, I went Jedi training! I learnt how to use a lightsaber and went up against real Star Wars villains at Jedi Training: Trials of the Temple. Next time we visit, Dad and I both want to go to Star Wars: Galaxy’s Edge and have more Star Wars adventures.

“I’d love to build a droid at Droid Depot and check out Star Wars: Rise of the Resistance. You get to help the resistance on a secret mission – it looks amazing. We all want to ride Millennium Falcon: Smugglers Run. You take control of the coolest ship in the galaxy and my dad says he is going to be the pilot!” 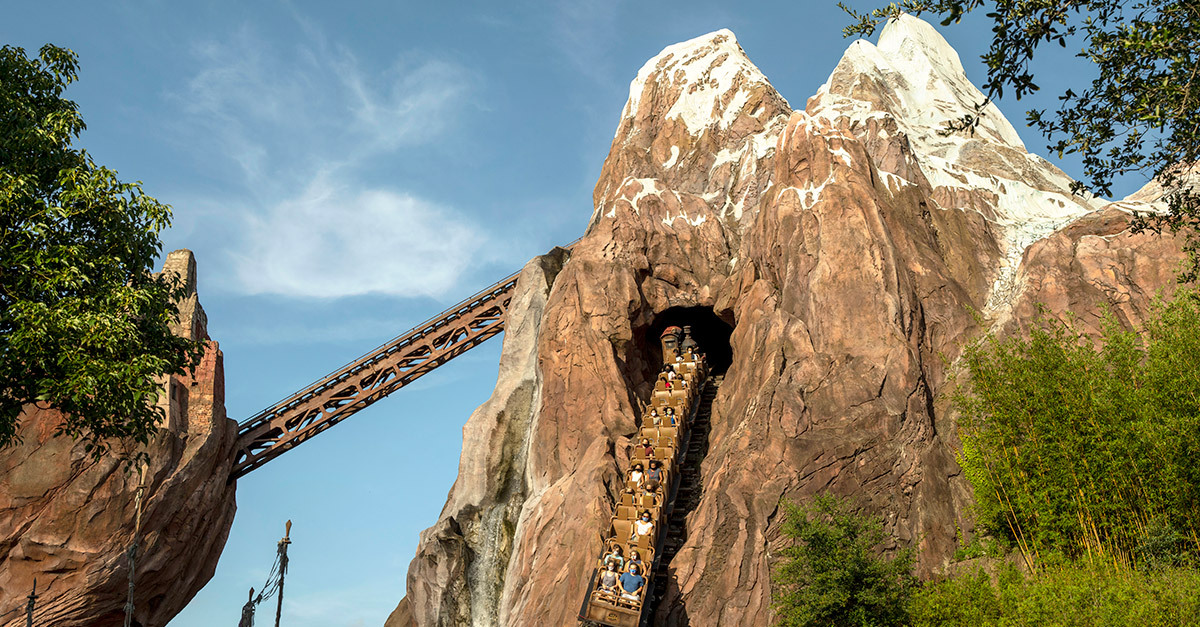 Being brave and go on the big thrill rides

There are plenty of exciting rides to keep everyone happy at Walt Disney World Resort. You can turn mountain climber scaling 199ft up the Himalayas on Expedition Everest – Legend of the Forbidden Mountain at Disney’s Animal Kingdom Theme Park, head underground on the classic mining ride Big Thunder Mountain Railroad, or even into the unknown on Space Mountain at Magic Kingdom Park. One of the faster Disney rides is Rock ’n’ Roller Coaster Starring Aerosmith at Disney’s Hollywood Studios.

Last time the family went it was too much for Ellie, but now she’s going to be brave. “Mum said it was brilliant, but I was a bit too scared to go on because it goes at about 60mph and it goes upside down! I feel a lot braver now, so I definitely plan to ride it when we go back in 2022.” 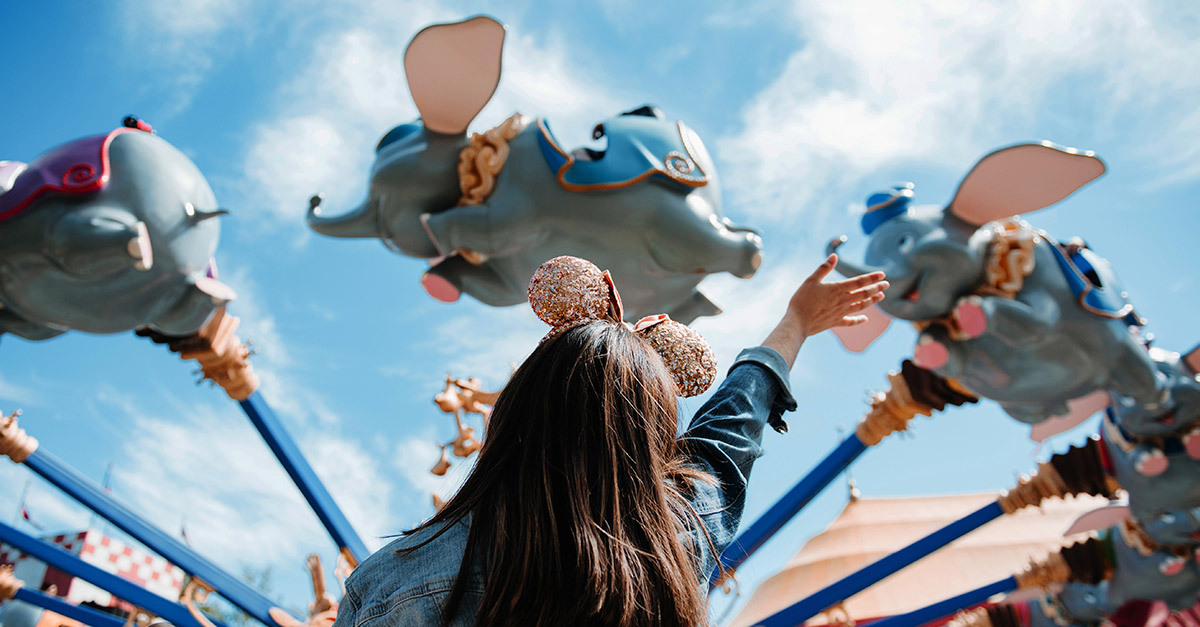 With so many cherished Disney Characters and stories, nobody should miss seeing the timeless fairytale classics coming to life at Magic Kingdom Park. Big kids of all ages can set sail on a swashbuckling adventure on Pirates of the Caribbean, or race through a diamond mine on Seven Dwarfs Mine Train.

And where would we be without Dumbo? You can fly high and swoop low on Dumbo the Flying Elephant, always keeping an eye on his faithful friend Timothy and keeping everyone aloft with his “magic” feather. “It’s nice that as well as the big exciting rides, there are lots of attractions for the little ones, too,” says Liz.

For some smashing splashing fun, don’t forget Disney’s Water Parks, such as Disney’s Typhoon Lagoon Water Park* or Disney’s Blizzard Beach Water Park, with jumbo slides like Summit Plummet as well as whirlpools and lazy rivers. These attractions are perfect when you need to cool off from the Florida sun. “There are eight lanes on the Toboggan Racers, so I’m going to get us all to go on at once and have a big race – I bet I’ll win!” says Ellie. 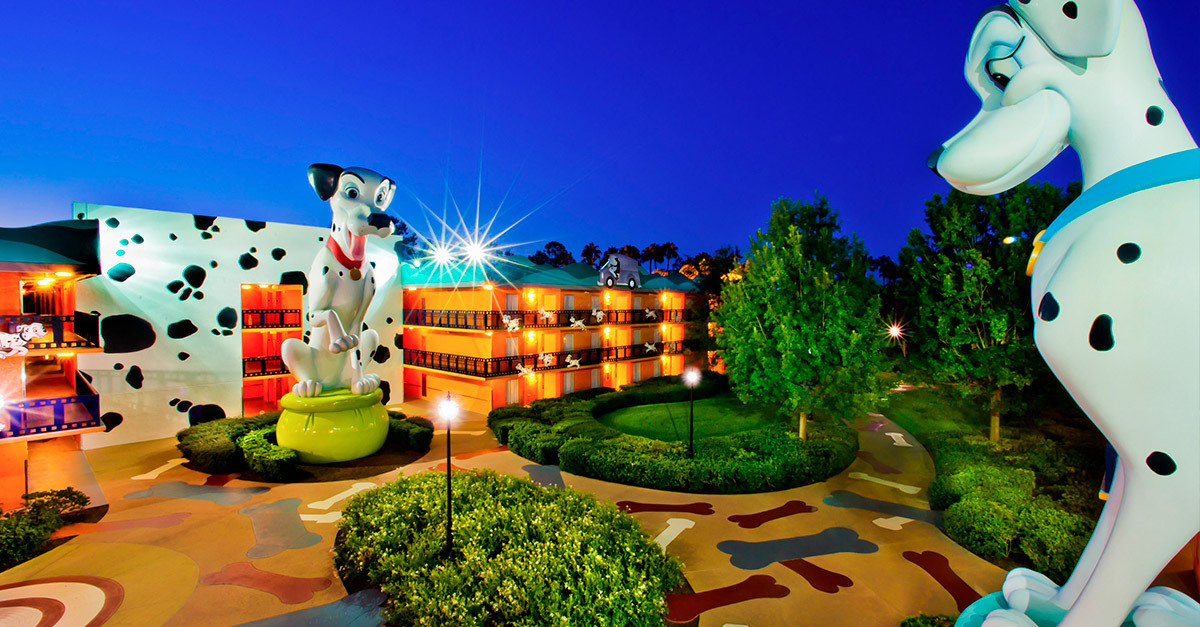 Getting to stay in one of the Disney Resort hotels

Staying at a Disney Resort hotel is a great way to fully immerse yourself in the magic, and you’ll find the same legendary attention to detail, service and storytelling Disney parks are renowned for. Plus, you’ll stay right in the heart of the action close to the Theme Parks, Water Parks and shopping areas.

“Staying in one of the hotels makes everything so easy and convenient,” says Liz.

“There’s complimentary transport so you can get to anywhere across the Resort, and even the new Disney Skyliner gondola at some Disney Resort hotels.”

“And you never know when there might be surprise appearances from one of the Disney Characters and the kids will love that.”

Liz speaks for the whole family when she says: “Going to Walt Disney World Resort is the best holiday ever and we just can’t wait to go back!” 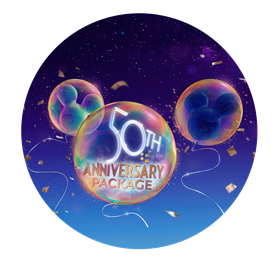 Book by August 3, 2021 for select arrivals in 2022 to enjoy this magical package when staying in selected Disney Resort hotels including: