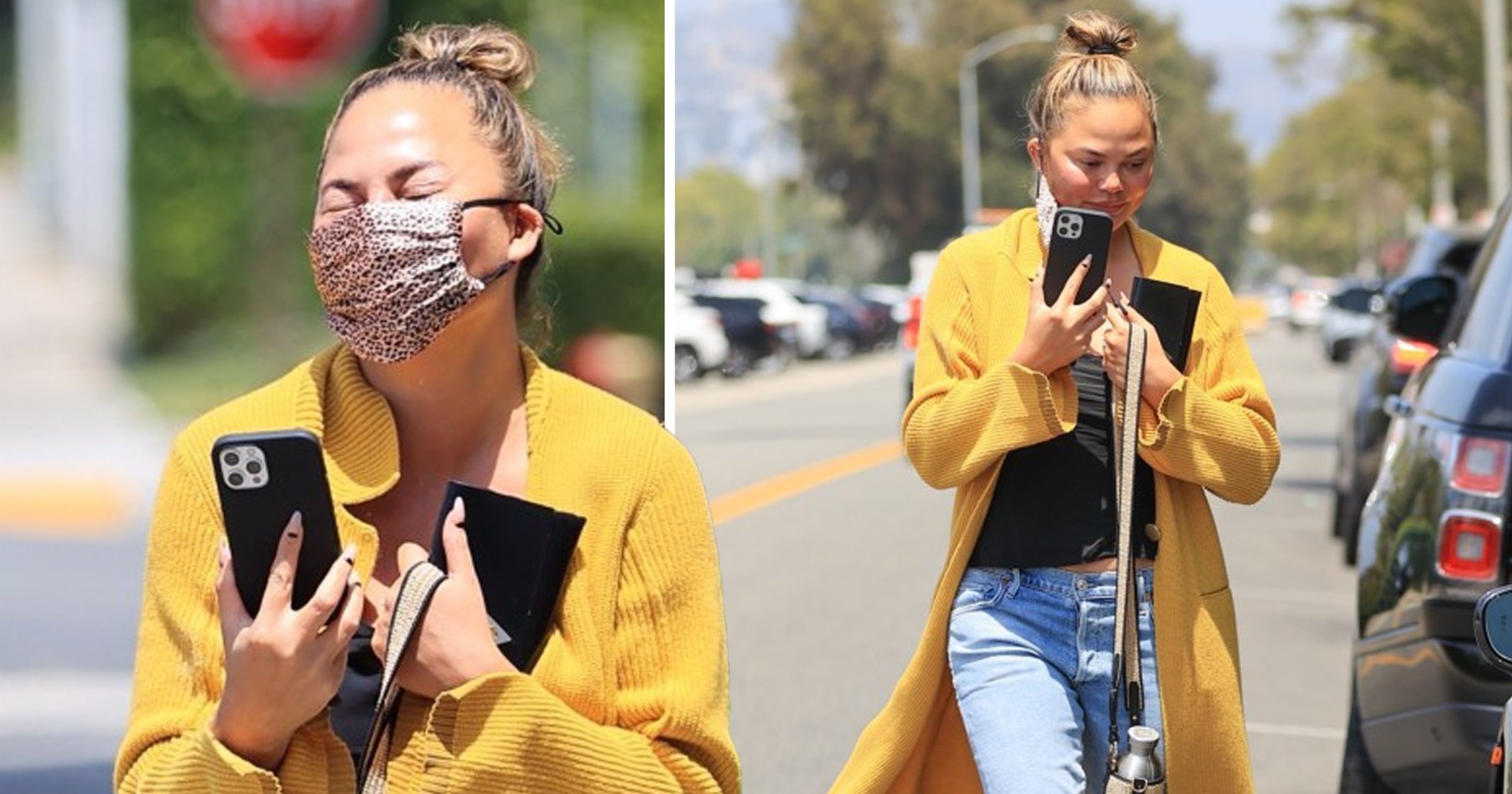 Chrissy Teigen was spotted for the first time in weeks after she publicly apologised to Courtney Stodden for trolling them online in the past.

The former Celebrity Big Brother star, who recently came out as non-binary, called out the model for previously telling them to ‘kill yourself’ in a direct message on Twitter.

Chrissy has been keeping a fairly low profile, previously enjoying a family day out at Disneyland, but was seen heading out in Los Angeles at the weekend, looking cheery while on the phone.

The cookbook author was heading out of a business meeting as the ongoing backlash continues and appeared to be sharing a joke with whoever was on the FaceTime call.

The 35-year-old, wearing a long yellow cardigan, blue jeans and a leopard print face mask, held up her phone in one hand and clutched a bottle of water in the other as she chatted down the street.

Apologising to Courtney for her past comments, 26, Chrissy said: ‘Not a lot of people are lucky enough to be held accountable for all their past bulls**t in front of the entire world. I’m mortified and sad at who I used to be.

‘I was an insecure, attention seeking troll. I am ashamed and completely embarrassed at my behavior but that is nothing compared to how I made Courtney feel.

‘I have worked so hard to give you guys joy and be beloved and the feeling of letting you down is nearly unbearable, truly. These were not my only mistakes and surely won’t be my last as hard as I try but god I will try!!’

The 35-year-old continued: ‘I have tried to connect with Courtney privately but since I publicly fuelled all this, I want to also publicly apologize. I’m so sorry, Courtney. I hope you can heal now knowing how deeply sorry I am.

‘And I am so sorry I let you guys down. I will forever work on being better than I was 10 years ago, 1 year ago, 6 months ago.’

Chrissy’s business outing came before the reality TV star announced they are engaged to partner Chris Sheng, sharing a video of their sparkling engagement ring on Instagram.

Courtney said: ‘I said yes …OH and the ring made me gag it’s so beautiful.’

They made headlines in 2011 when, aged 16, they wed The Green Mile star Doug Hutchison, who was 50 years old at the time.

For more stories like this, check our entertainment page.

Follow Metro.co.uk Entertainment on Twitter and Facebook for the latest celeb and entertainment updates. You can now also get Metro.co.uk articles sent straight to your device. Sign up for our daily push alerts here.