I first spoke with Shane Goplin, a sixth-generation farmer in west-central Wisconsin, in March, when trade negotiations between Washington and Beijing were progressing, however fitfully.

I cover the national economy, and ever since trade tensions with China started heating up I had been talking with soybean farmers throughout the Midwest and South. China had been the largest buyer of American soybeans, and these farmers had borne the brunt of the economic pain set off by the spiral of tariffs and retaliation. 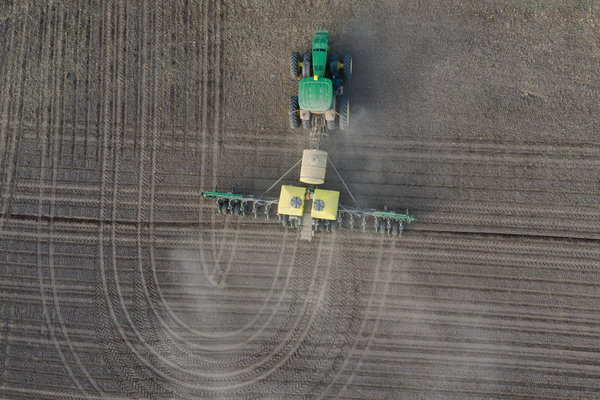 With a deal seemingly within reach, I wanted to line up soybean farmers to interview so that the moment an agreement was announced, I would be able to report their initial reactions to the news and provide an in-depth look at their experiences over the past year.

Two more months passed before President Trump announced on Twitter that he was ratcheting up the trade war and threatening to impose even stiffer tariffs on almost all Chinese imports.

I called Shane. “That tweet cost me $40,000,” he said, explaining that the price of a bushel of soybeans plunged by more than 10 cents after the president’s threat appeared. “Every penny in the market is tens of thousands of dollars for me.”

Shane was in his tractor when he spoke to me, planting corn, and when I asked if I could come out and join him in the cab he said yes.

My flight from New York went through Chicago, and it was only when I saw four enormous muzzled German shepherds with federal K-9 handlers waiting to board the small puddle jumper to Eau Claire that I realized Vice President Mike Pence was headed there, too. He was stumping for the administration’s trade deal with Canada and Mexico, and the dogs were part of his protective detail.

Shane knew another farmer, Joe Bragger, who was attending the vice president’s rally the next day, so we arranged to have dinner afterward with Joe and his family at their home.

Once that was taken care of, we could return to planting corn. Shane’s John Deere 8335R tractor is equipped with state-of-the-art GPS and can pretty much direct itself, automatically aligning the rows of seeds being planted. Yes, I wanted to drive it. (Though when I learned a new one sold for $330,000, I understood why he wasn’t eager for me to take the wheel.)

Shane told me about his family’s history as farmers in the area, which stretched back to the 1850s when his ancestors first arrived as immigrants from Norway.

We talked about weather cycles; the effect of a cold snap on early corn (it’s like the brain freeze headache that strikes when you eat ice pops too fast); commodity prices and loans; his wife’s teaching job, his three daughters and white deer hunting; why he voted for Mr. Trump; the impact of tariffs; federal farm aid; and China’s leaders.

Then we drove off to the next field.

But it is a tough life. Over the previous week, Shane had spent 125 hours in the tractor and had missed his daughter’s performance in a concert the night before. “No one should have to work this hard to make a living.”

Shane said he and other farmers he knows wanted a businessman in the White House. Most important, he said, is that Mr. Trump “loves farmers.”

“It makes me feel really good to hear Trump say farmers are important to this country,” he said. “That’s what makes me want to stick with the president.”

And while he hopes the trade fight is settled soon, he doesn’t think trade is the “silver bullet” that is going to solve farmers’ problems.

When heavy morning rains canceled the next day’s planting, I toured Countryside Cooperative’s grain elevator and storage bins, which Shane and farmers in the surrounding counties use. There, Mike Christenson, the agronomy supervisor, was dealing with the headache of getting dried fertilizer delivered since flooding had halted barge traffic in their region along the Mississippi. I drove across the river to Winona, Minn., to see the quieted grain terminals for myself.

Shane and I met up later at the Bragger home. Joe Bragger had just returned from listening to the vice president speak at what he labeled “a whistle stop” at an equipment manufacturer.

Like Shane, he was ready to support President Trump until the trade war ended, yet still believed the trade issue was only one front on which farmers were battling. “From the dairy side, it’s a distraction,” Joe said. Overproduction and drooping commodity prices, he said, are the real problems.

When Noel, his wife, announced dinner was ready, I turned off my recorder, put down my notepad and sat down with the Bragger clan and Shane on the porch looking out over a part of his farm. There were lots of stories, laughs and ice cream. A perfect evening.

The next day, I drove to the airport, dropped off my rental car and headed toward the terminal. There are only two flights that depart from Eau Claire each day, so I wasn’t all that surprised when I ran into a familiar face. It was Tuco, the dog who had sat across the aisle from me on the trip from Chicago a few days earlier. We were both headed home.

Follow the @ReaderCenter on Twitter for more coverage highlighting your perspectives and experiences and for insight into how we work.

Patricia Cohen covers the national economy. Since joining The Times in 1997 she has also written about theater, books and ideas. She is the author of “In Our Prime: The Fascinating History and Promising Future of Middle Age.” @PatcohenNYT • Facebook