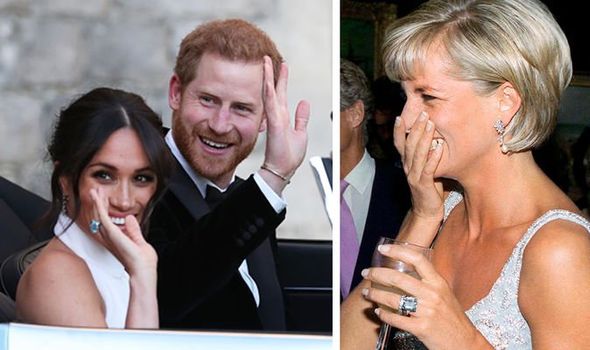 Since marrying Prince Harry, Meghan Markle has been photographed wearing many items from Princess Diana’s jewellery collection. Arguably two of the Duchess of Sussex’s favourite pieces are the Princess of Wales’ Cartier watch and diamond bracelet. Express.co.uk spoke to Steven Stone’s Creative Director and jewellery designer, Maxwell Stone about Diana’s items Meghan is now in possession of and what the colour of the iconic aquamarine ring represents.

“Over 18 months later Meghan made some alterations to the ring, replacing the yellow gold band with a delicate diamond-studded band instead.

“Prince Harry custom designed the ring which includes a centre cushion cut diamond, sourced from Botswana – a place that holds a special place in the couple’s hearts.

As for how much Meghan’s engagement ring is worth, Mawell estimates the three to four carat stone which is “extremely high quality with incredible colour and clarity, flawless to the naked eye” is valued around £130,000.  The two round diamonds supporting the centre stone are from Princess Diana’s jewellery collection are around 0.5 to 0.75 carats each.

“The earrings are set with yellow gold and are decorated with around 0.6ct of white diamonds – 0.3ct in each earring.

“The earrings have a value of around £5,000, however due to the legacy of the Royal women who have worn them, this particular pair would probably sell for much more.”

Featuring an emerald cut aquamarine flanked by small solitaire diamonds, the eye-catching aquamarine was given to the Princess by her friend, Lucia Flecha de Lima, and created into a ring by Asprey in 1996.

The first appearance of the ring came when Diana, attended the Victor Chang Cardiac Research Institute Fund raising Dinner in Sydney, in October 1996, a few months after her divorce from Prince Charles. – seems to be too many commas here.

She paired the ring with a coordinating pearl bracelet, featuring a huge aquamarine clasp.

The ring, set on a 24-carat yellow gold band, was passed down to Prince Harry who gave it to Meghan Markle to wear for the couple’s wedding reception.

Maxwell said: “Aquamarine is one of the most visually beautiful gemstones. With an enchanting pale blue colour, the ring complimented Diana’s skin tone perfectly.

“Now having been passed down to Meghan Markle from Harry, it’s interesting to know that the Aquamarine’s light blue colour symbolises feelings of sympathy, trust, and friendship.

Meghan wore Princess Diana’s bracelet for the official start of the Australian royal tour following the news that the Duke and Duchess were expecting their first baby.

After analysing the bracelet, Maxwell said: “The bracelet features two large royal blue cabochon sapphires, that look to be around five carats each.

“The stones are embellished with small diamonds on a yellow gold cuff.

“This bracelet likely has a high price tag, thanks to the size of the stones it features.

Princess Diana was a huge fan of Cartier and was often seen wearing a gold Cartier Tank Française watch, given to her by her father on her 21st birthday.

Inherited by Harry, he gave the watch to Meghan, who’s also been spotted wearing it on numerous occasions, most notably in a photo taken of her and Harry for Time magazine in 2020.

Maxwell Stone said: “A watch like this is timeless, however it also comes with a high price tag.

When Prince Harry and Meghan sat down to speak with Oprah Winfrey earlier this year, the Duchess was seen wearing a sparkling diamond tennis bracelet once owned by her late mother-in-law.

Reportedly by French luxury brand Cartier, the item was worn in public by Diana several times, and it is thought Harry took stones from the very same bracelet to create the engagement ring he proposed to Meghan with in 2017.

“It’s a classic tennis bracelet or line bracelet, made with alternating white diamonds.

As for how much the piece is now worth, Maxwell revealed: “A bracelet like this could be worth up to £30,000.”

In total, the six items of Princess Diana’s jewellery collection, Meghan owns, are valued at £293,000.