A is for art. Catch the Archibald Prize finalists at the Art Gallery of NSW (until September 8) and celebrity spot subjects such as Packing Room Prize-winner David Wenham, plus Tony Costa’s winning portrait of Buddhist Lindy Lee. If too much Archie is never enough, head on over to the SH Ervin Gallery for its best of the rest exhibition, the Salon des Refuses (until July 28). 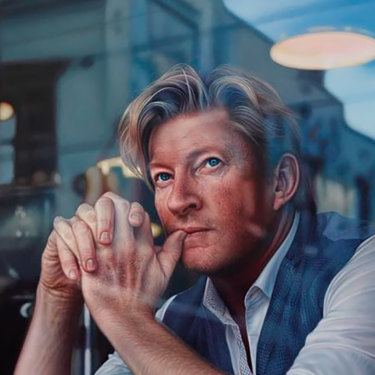 B is for Bangarra. Don’t miss the celebrated Aboriginal and Torres Strait Islander dance company as it celebrates its 30th anniversary with a triple bill, Bangarra: 30 Years of Sixty Five Thousand, at the Sydney Opera House (June 13-July 13).

C is for cabaret. When Liza Minnelli sang, “Put down the knitting, the book and the broom,” in Cabaret, the lady meant business. National treasure and artistic director Trevor Ashley would like you to do the sameat the inaugural Sydney Cabaret Festival (July 5-14), which features local favourites such as Tim Draxl and international stars such as Jennifer Holliday puttin’ on the Ritz.

D is for Darug. Learn the local indigenous language as part of Reconciliation Week at this workshop at Rosehill’s Elizabeth Farm (Sydney Living Museums, June 1). It will be run by cultural elders and community groups, who will teach you simple conversation and then fill you up with a bush tucker lunch.

E is for eastern suburbs. Strap on your skates and channel your best Torvill or Dean, as ice skating returns to Bondi Beach as part of Bondi Feast (July 9-20), which brings comedy, theatre, cabaret and circus to the sands.

F is for film festival. The Sydney Film Festival (June 5-16) kicks off with Palm Beach – not a sordid reveal-all about Summer Bay, but Rachel Ward’s tale of friends who reunite only for deep secrets to emerge. Starring a top-flight Australian cast, including Ward’s hubby, Bryan Brown, Jacqueline McKenzie and Heather Mitchell, plus ring-ins Sam Neill and Richard E. Grant, it’s one of more than 250 films screening during the 12-day festival.

G is for Gleeson, Tom. Catch The Hard Quiz host doing the thing he did before he became infamous for happily roasting contestants alive on his ABC quiz show, as brings his stand-up show, Joy, for a spin around the Opera House (August 24).

H is for history (and Hugh Jackman). Discover some of Sydney’s most beautiful homes by candlelight as Sydney Living Museums guides visitors on night-time tours through Vaucluse House (July 26) and Elizabeth Bay House (August 23). If song and dance is more your bag, Hugh Jackman will deliver that in spades when he brings his world tour to Homebush (Qudos Bank Arena, August 2-7). 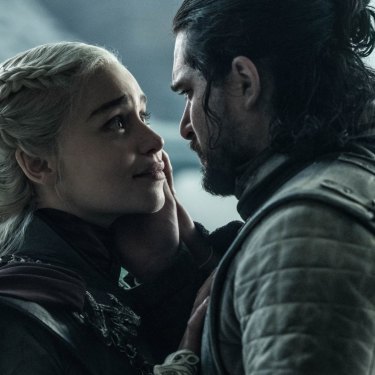 Winter is coming to the Sydney Opera House with Thrones! A Musical Parody. Credit:HBO

I is for the Iron Throne. If you whined that the final season of Game of Thrones didn’t end the way YOU wanted it, then this playful prod at the bloodthirsty HBO fantasy series is probably not for you. Featuring highlights from the show’s eight seasons and show tunes celebrating all the sex, death and dragons, Thrones! The Musical Parody (Sydney Opera House, June 5-30) is strictly for fans with a sense of humour.

J is for jogging. Dig out the Dunlop Volleys and sweatbands and join the thousands of weekend warriors slogging their way up Heartbreak Hill in the annual City 2 Surf (August 11). The 14-kilometre course snakes from the city to Bondi Beach, but you better start training now – and plotting any public toilet stops – if you want to avoid the burn and the bust.

K is for kids. Shout your best pantomime “He’s behind you!” at Jack and the Beanstalk (State Theatre, July 12-21); sing along with Dan Sultan as he brings his gorgeous children’s album Nali and Me to the stage (Factory Theatre, July 13); or gross out with Roald Dahl’s The Twits (Monkey Baa, July 18-20).

L is for lights. Can it be anything else but Vivid (until June 15)? Yes, it’s busy but the lights are pretty, so you might as well go and have a look. This year, Los Angeles artist Andrew Thomas Huang takes over the Sydney Opera House sails with his imaginings of native flora and fauna; Rhoda Roberts has the Harbour Bridge in hand with the projection work Eora: Broken Spear; while Colombia comes to the Museum of Contemporary Art, as Colombian-born Sydney artist Claudia Nicholson drapes the gallery in flowers.

M is for musicals. Got a taste for blood? Try American Psycho (Hayes Theatre, until June 9). Prefer a bit of ABBA mixed with Aussie lingo? You get the not-so-terrible Muriel’s Wedding The Musical (Lyric Theatre, from June 28)! Like the idea of a musical based on an Oscar-winning movie about an Irish busker and Czech immigrant? It’s Once (Darlinghurst Theatre, June 26 to July 21) for you! Can’t get enough of true crime? Razorhurst (Hayes Theatre, from June 14) covers the story of Sydney’s two 1920s crime queens Kate Leigh and Tilly Devine. Need some political consolation? The Dismissal looks at Gough Whitlam’s greatest hits (Seymour Centre, June 18-22). 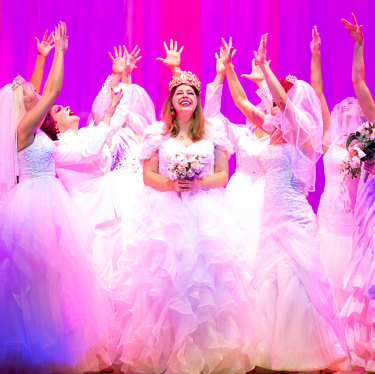 N is for nostalgia. Sydney artist Brett Whiteley had it all – international acclaim, big ideas and an equally dynamic wife in Wendy. Look back at the fame and tumult in Whiteley (Sydney Opera House, July 15-30), a brand new operatic work by Elena Kats-Cherin and Justin Fleming.

O is for Oi Oi Oi. Sure, there are plenty of big-name international acts are hitting the stage this winter, but spare some time for local favourites old and new, including Jack River (Enmore Theatre, June 7), the Whitlams (Metro, June 14), Seth Sentry (Factory, June 9), Alex Lahey (Metro, June 15) and the Hilltop Hoods (Quodos Bank Arena, August 31).

P is for Parks and Recreation. OK, so this is nothing to do with the great outdoors, rather it’s a very indoor activity as two stars of the very funny US comedy – Aziz Ansari and Nick Offerman – bring their shows to town. You can catch Ansari’s stand-up act Road to Nowhere at the Sydney Opera House (June 4) or Offerman’s Rise Up, an “evening of deliberative talking and light dance” at the State Theatre (June 18). For bonus points, throw in an evening with Megan Mullally (Offerman’s wife and sometime Parks co-star) when she plays the Sydney Opera House with her band Nancy and Beth (June 16).

Q is for queue. Jump on the wait lists for these sold-out shows at the Enmore Theatre for Annabel Crabb and Leigh Sales' Chat 10, Looks 3 live podcast show (June 18), for British hip-hop favourite The Streets ( July 19) and for US indie band Lumineers (Enmore Theatre, July 22). If you're lucky enough to get a ticket, cap off the night by walking across Enmore Road for an award-winning gelato from the always busy Cow and the Moon.

R is for rugby. If league’s your thing, don’t miss the Women’s State of Origin (North Sydney, June 21), while the blokes bring their particular breed of boof to ANZ Stadium on July 10 for game three of State of Origin. If the game they play in heaven is more your style, your best hope is the Waratahs v the Brumbies (Western Sydney Stadium, June 8).

S is for stargazing. Lift your eyes to the sky with Professor Brian Cox as he brings his Universal World Tour to town (State Theatre, June 20-22) or take a more down-to-earth approach as Colin Friels plays the Italian astronomer/physicist/engineer in the eponymous Galileo at Belvoir (August 3 to September 15).

T is for theatre. Big names hit the stage this winter, with funny girl Celia Pacquola starring as a pioneering journalist in the gold rush era in The Torrents (Sydney Theatre Company, July 18-August 24); Mia Wasikowska turns William Golding’s story of schoolboys trapped on an island on its head in Lord of the Flies (Sydney Theatre Company, July 23-August 24); the indomitable Helen Thomson stars in the Neil Armfield-directed family saga Things I Know To Be True (Belvoir, June 8 to July 21); Meyne Wyatt tackles racism in City of Gold (Griffin, July 26 to August 31); and Georgie Parker travels back in time to a 1950s radio play for Murder on the Wireless (Ensemble, June 9 to July 13).

U is for 'umpack whales. (OK, that’s a stretch, but I needed room for winter solstice.) Winter is peak whale watching season, with most starting to head north at the end of June and early July. Top spots include North Head Lookout, Hornby Lighthouse at Watsons Bay, Arabanoo Lookout at Dobroyd Head, South Head and Shark Island. 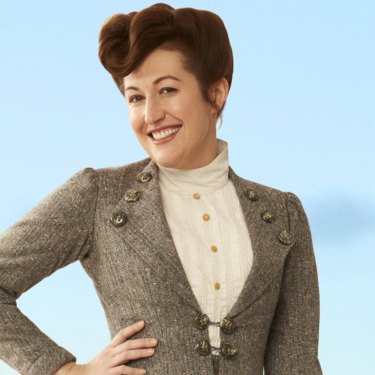 V is for velo. Why not take your daily commute up a notch and join a bike club? The family-friendly Dulwich Hill Bicycle Club (dhbc.org.au) have daily suburban rides, with longer trips on weekends to Waterfall.

W is for winter solstice. To celebrate the longest night of the year, June 21, and the start of a new season, Centennial Parklands are hosting Camping 101, a family campout that includes tent assembly tutorials, bat watching, campfire fun and a guided nocturnal walk.

X is for women (well, the chromosome, anyway). Let’s hear it for the girls as the Sydney Film Festival celebrates 10 fabulous female directors, including Gillian Armstrong, Shirley Barrett, Nadia Tass and Jane Campion, with screenings of a selection of their films that reverberate around the theme of family (June 5-16).

Y is for yummy. Carriageworks brings back its epic Night Market (July 19), with stallholders riffing on the theme of “wild”. More than 50 of Sydney’s restaurants, bars and producers will be vying for tummy space, including Rising Sun Workshop, Kepos Street Kitchen, Belles Hot Chicken and the CWA, of course.

Z is zoo. Yes, it’s an obvious one to finish with, but who can resist Taronga Zoo, especially when it’s lit up at night for Vivid? Lights for the Wild (until June 15) will feature new light artworks, including sculptures of three baby Sumatran tigers, a pride of lions and a koala.