A bride-to-be has been slammed as ‘cheap and selfish’ after revealing she will be holding a ‘host free’ reception where her guests are expected to pay for their own dinner and drinks.

The mother-of-three explained she is having a destination wedding by the beach – four hours from where most of her guests live so they also have to pay for travel and accommodation.

And, to make matter more complicated, she isn’t even booking a venue for the after-party and is instead hoping she and her hundred guests will be able to ‘crash a pub’. 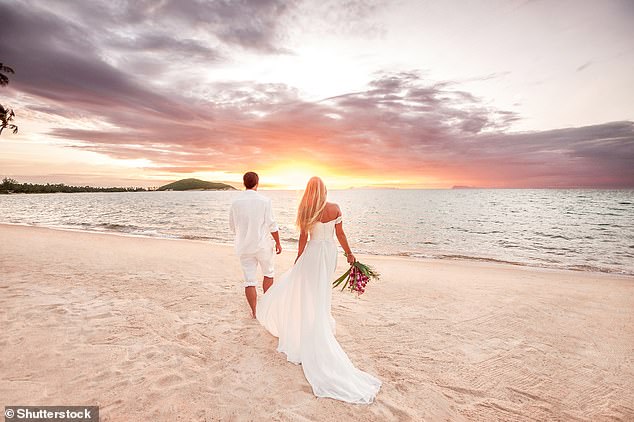 ‘And I don’t feel bad about doing so – if they want to be a part of our special day and celebrate our love with us this is what they have to do,’ she wrote.

She went on to explain it was her dream to have a ‘micro wedding’ which is why she only planned for 100 guests and didn’t feel bad making them cover costs.

But this just outraged people further.

‘100 people is not a micro wedding,’ one woman pointed out.

‘The only thing micro about your wedding is the budget,’ explained another.

The future bride’s post was initially shared in a budget wedding Facebook Group before being leaked on a wedding shaming’s page.

‘I would love to be able to send this post to her guest list,’ one woman sneered.

Other people said the couple should just elope.

Another woman who had seen it in the original group claimed the bride was ‘out of her mind’.

‘I have been waiting for this to pop up here,’ she said.

One woman explained the bride was being ‘selfish on many levels’.

‘They aren’t even going to bother telling the pub that 100 extra customers will be arriving on the night so they can make sure there is enough staff to deal with it,’ they fumed.

Adding that they’d be lucky to all get dinner if the kitchen isn’t warned about the ‘sudden influx’ of guests.

‘I seriously want to know how this plays out – I mean how do you even communicate this to guests?’

But others didn’t appear to see a problem with the bride’s plan.

‘My cousin did it. She and her husband could not afford a wedding reception and we all paid a deposit ahead of time for the restaurant reservation. It was in the invite. Nobody had an issue with it.’

‘As long as it’s put out there on the invitation that there’s no food then it is what it is,’ added another.

While one person argued it is ‘ridiculous and outdated’ to expect a couple to pay for a sit down dinner for 100 people.