A disabled woman who has been turned down for more than 500 jobs has revealed how potential employers’ faces would ‘drop’ when they saw her arriving for interviews in a wheelchair.

Lucy Thorpe, 24, from Derbyshire, applied for hundreds of office roles over an 18-month period and was left ‘demoralised’ and suffering with anxiety after being constantly rejected.

The criminology graduate, who has Ehlers-Danlos Syndrome, which means her joints are very loose and prone to dislocation, was asked during one interview why she didn’t ‘just stay on benefits’.

At another, Lucy, who survives on £600 a month, was forced to transfer herself onto a foot-high step, then lift her wheelchair onto it and climb back in, to gain access to the company’s building. 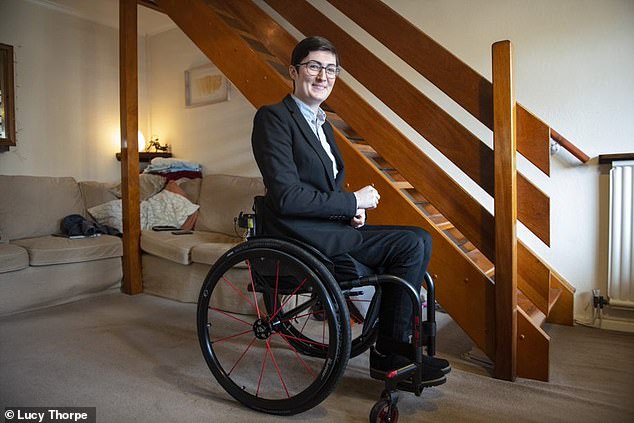 Lucy Thorpe, 24, from Derbyshire, said she was turned down for more than 500 and after 100 interviews (pictured) 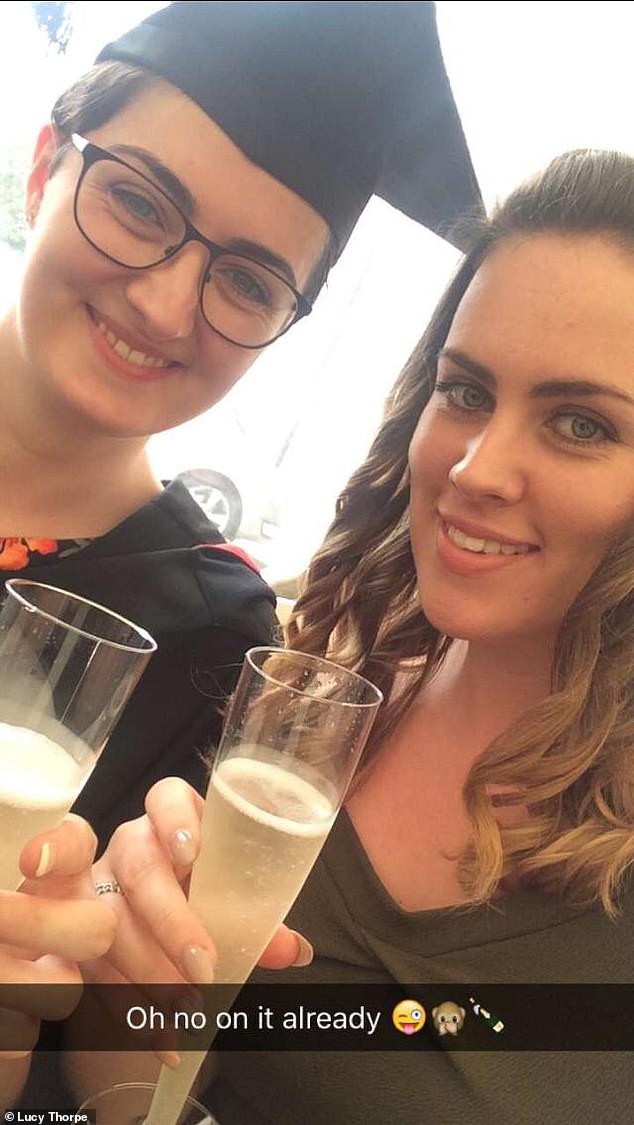 The criminology graduate has Ehlers-Danlos Syndrome, which means her joints are very loose and prone to dislocation. Pictured: Enjoying a drink during her graduation ceremony with her older sister in 2017

She said: ‘I’ve lost count of the number of roles I’ve applied for – it’s well over 500. I heard back from about half, and I’ve had about 100 interviews.

‘But it was the second they saw the chair, or I declared I had a disability, that they would say “we’ve found a better candidate”. It was always the same loophole.

‘There were a few occasions that employers said in a subtle way, “we’re not hiring you because you’ve got a disability”. I’m not stupid, I can read between the lines.’

Discrimination on the grounds of disability is illegal under the 2010 Equality Act. However, Lucy is adamant she was rejected ‘solely on the basis of my disability’. 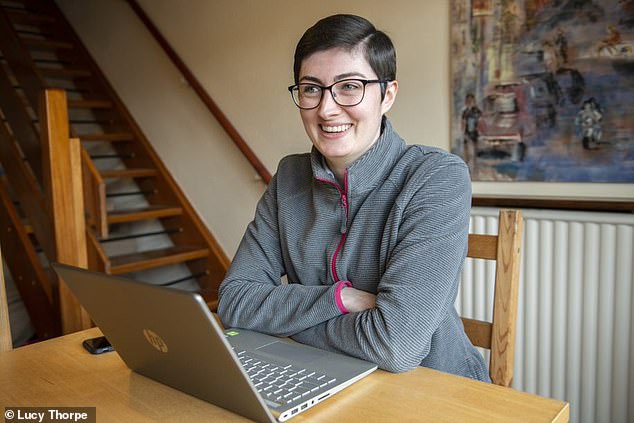 Lucy (pictured at home) said she was rejected for jobs solely on the basis of her disability, which is illegal. She was once asked why she didn’t ‘just stay on benefits’ during a job interview

She added: ‘On some occasions, the employer would take one look at me and I could see their face drop.

‘I was once asked by an employer why I had applied for the job and why I didn’t just stay on benefits, because they didn’t think I had the capability to do the job.

‘I ended up with depression and anxiety. I was in utter despair and didn’t know what else to do.’

Lucy started applying for jobs two years ago after being awarded a 2:1 in her degree in criminology and criminal justice at Bangor University in North Wales.

She doesn’t declare her disability in applications ‘unless absolutely necessary’, and has been invited to attend more than 100 interviews.

However, she said many employers would hold these away from their premises, leading her to believe their building wasn’t accessible.

Under the Equality Act 2010, employers must provide reasonable adjustments for disabled interviewees. 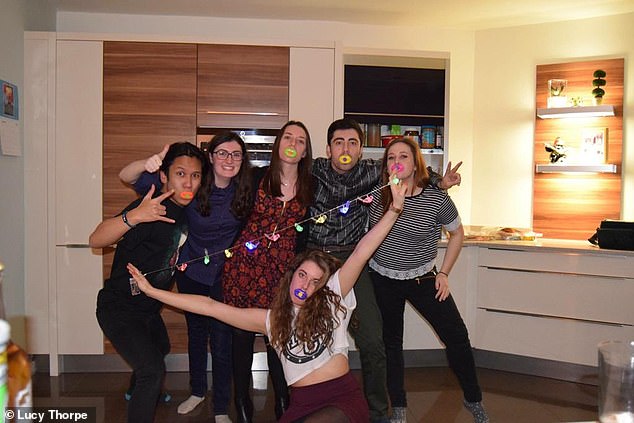 Lucy has to face several challenges in her work life, including accessibility to buildings. Pictured with her friend at a New Year’s Eve party in 2015

Lucy, who is an ambulatory wheelchair user, which means she has limited walking ability, said: ‘There was one building that had four stone steps up to it, a glass security door, and then the door into the building itself.

‘The gentleman who owned the building took me to a coffee shop around the corner to conduct the interview there.

‘As soon as he saw the chair and realised the building wasn’t accessible, he wasn’t interested.

‘He soon realised that I wasn’t able to get in the building and that he could hire someone he wouldn’t need to make any adjustments for.’

For another interview, she was forced to lift her wheelchair over a foot-high stone step.

She said: ‘I had to think quickly how I would get into the building – I wasn’t just going to say ‘it’s fine, don’t worry, we can do the interview over the phone or in another location’. I wanted to do it to prove a point. 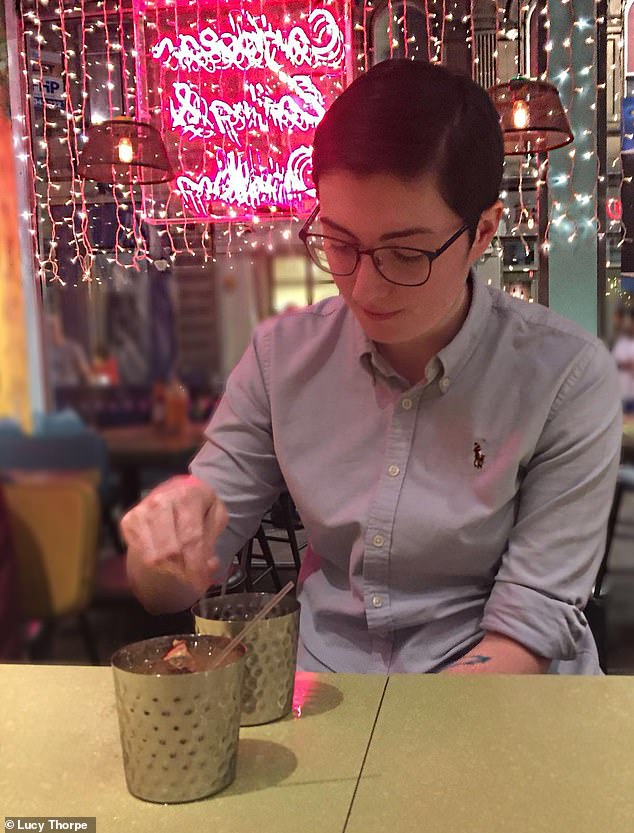 ‘So I got out my chair, transferred to the step, dragged my chair up the step, into the building, got back into my chair, and went through to the office, to prove that I’m not going to let a small obstacle get the better of me.

‘I make a point in interviews of saying, “I’m independent, I live alone, I can drive, I have an adapted car, I can do anything for myself”. And the same applies in the workplace.’

Last May, Lucy secured a job as an academic writer. However, she was made redundant in January – on the same day that she had inquired about her firm moving to a more accessible location.

She said: ‘The office was up a flight of stairs and there was no lift – so I had to drag myself up the stairs, and it got to the point that I actually pulled part of the bannister off the wall. 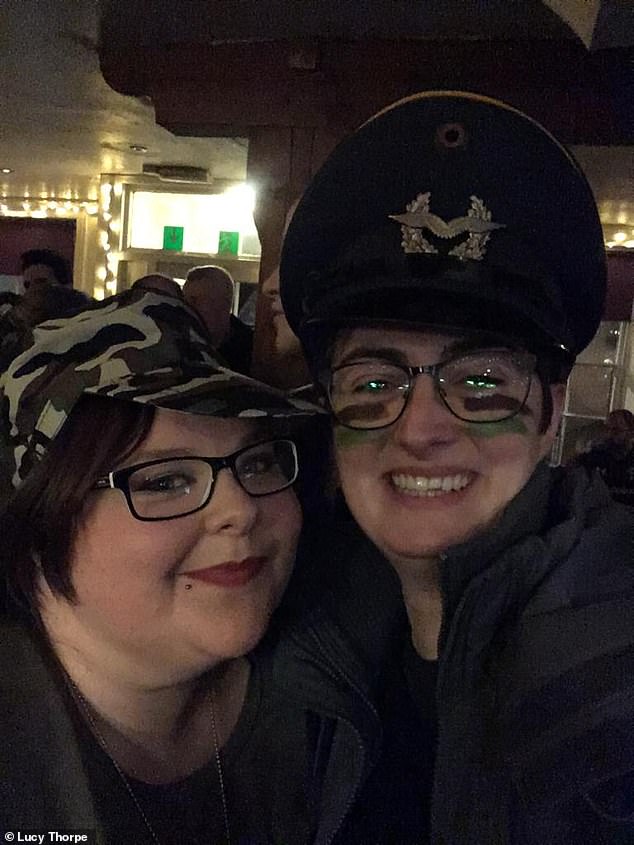 Lucy (right) with her friend Chloe at a reunion for a drama society. She receives £600 in benefits. She is still looking for part-time work but also plans to study for a masters degree in psychology in Nottingham and then a PhD in the US to eventually become a therapist

‘I asked my boss, the owner of the company, if we could move to a ground floor office in the building that had become vacant, and it was on that very same day that he said ‘it’s not possible because we’re going to have to let you go’.’

Lucy is still looking for part-time work, but she now plans to study for a masters degree in psychology in Nottingham and then a PhD in the US to eventually become a therapist.

She receives £600 a month in Personal Independence Payment and Universal Credit, which also pays for her rent. She admits having extra money would be useful.

She said: ‘I really can’t be ungrateful as it’s a great safety net for me, and without it I would be really lost. But it’s not a brilliant amount of money to live on.

‘I don’t remember the last time I bought myself clothes. The only luxuries I have are my gym membership – which I need to keep my strength to remain independent and push my chair around – and my mobile phone contract.’

Lucy, who was diagnosed with EDS in 2017, said the most important thing to her as a disabled candidate is being taken seriously. 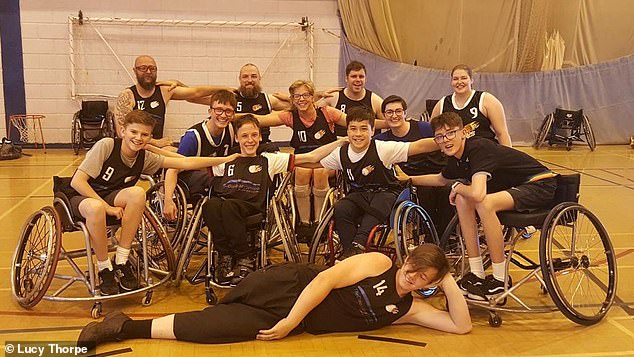 Lucy (right, with blue shirt) is part of a basketball team. She said that the most important thing to her as a job candidate was to be taken seriously

She added: ‘I’m able to work, I want to work – I got my very first job when I was 12 years old at a dog kennel and I then had a paper round.

‘My story is one in millions. I’m not the only one. I’m much more lucky and privileged than other disabled people, but we have to have these conversations about these uncomfortable topics – we can’t keep on sweeping it under the rug.’ 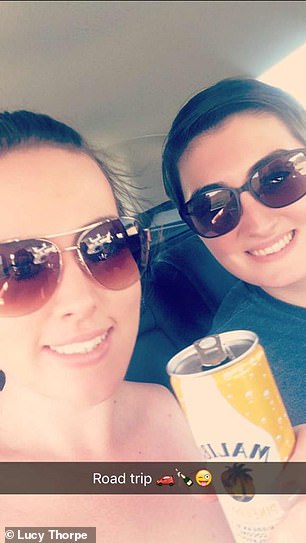 Research reveals there are one million unemployed disabled people in the UK who want to work, according to the Office of National Statistics.

A YouGov survey of HR professionals revealed more than half of 515 people questioned said they believed it would be easier to recruit a non-disabled person.

While a third admitted they had never interviewed a disabled person.

Miss Thorpe is speaking out as part of a campaign by Virgin Media and the disability equality charity, Scope, who are joining forces to call on businesses to take action to tackle the UK’s disability employment crisis.

They have launched the #WorkWithMe pledge, which has been backed by global brands including Philips, JCB and Centrica – an initiative to bring businesses together to help improve workplace practices.

Mark Hodgkinson, Chief Executive at disability equality charity Scope, said: ‘Disabled people often get a rough deal getting into and staying in work.

‘Far too many struggle to get into work, and too many fall out because they don’t get the support they need to thrive.

‘There is a huge amount of disabled talent and potential waiting for companies to tap into.

‘Both government and businesses have an urgent need to address the disability employment crisis.’

Minister for Disabled People Justin Tomlinson said: ‘While there are 950,000 more disabled people in work compared to five years ago, stories like Lucy’s prove that there’s more to be done to ensure every disabled person who wants to work can do so.

‘Recruiting disabled talent isn’t an act of charity – it’s what smart employers are doing to get ahead of the competition.’

What is Ehlers-Danlos Syndrome?

Ehlers-Danlos syndrome (EDS) is the name for a group of rare inherited conditions that affect the connective tissue.

Different types of EDS are caused by faults in certain genes that make connective tissue weaker.

Depending on the type of EDS, the faulty gene may have been inherited from one paren, or both.

EDS can affect people in different ways. For some the condition is relatively mild, while for others their symptoms can be disabling.

Some of the rare severe types can even be life-threatening.