A NEW Covid super-strain was officially named a "variant of concern" by the WHO tonight – amid fears it has already spread to the UK.

A dramatic video showed passengers banned from leaving a flight in Amsterdam arriving from South Africa hours after Belgium confirmed the first case in Europe. 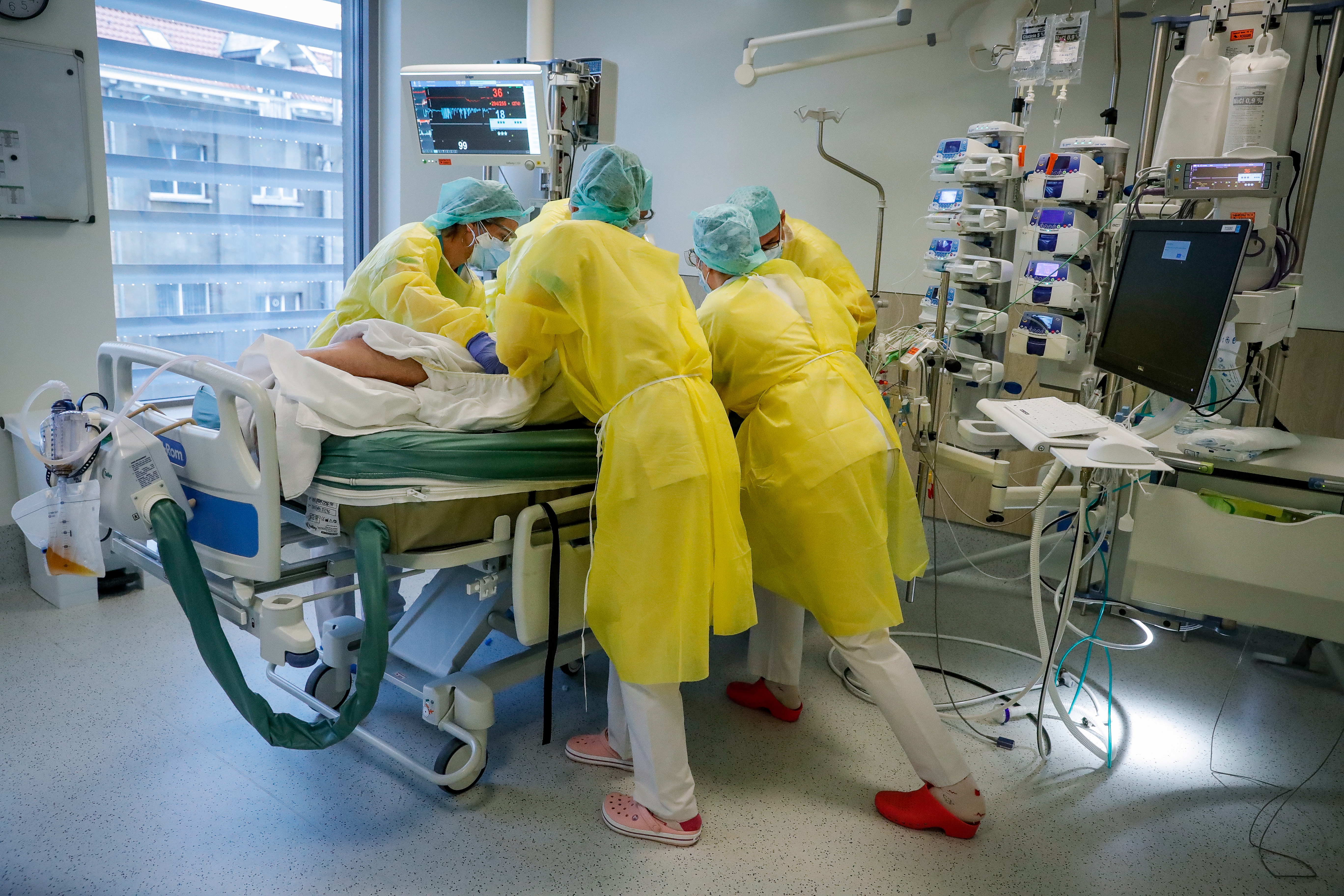 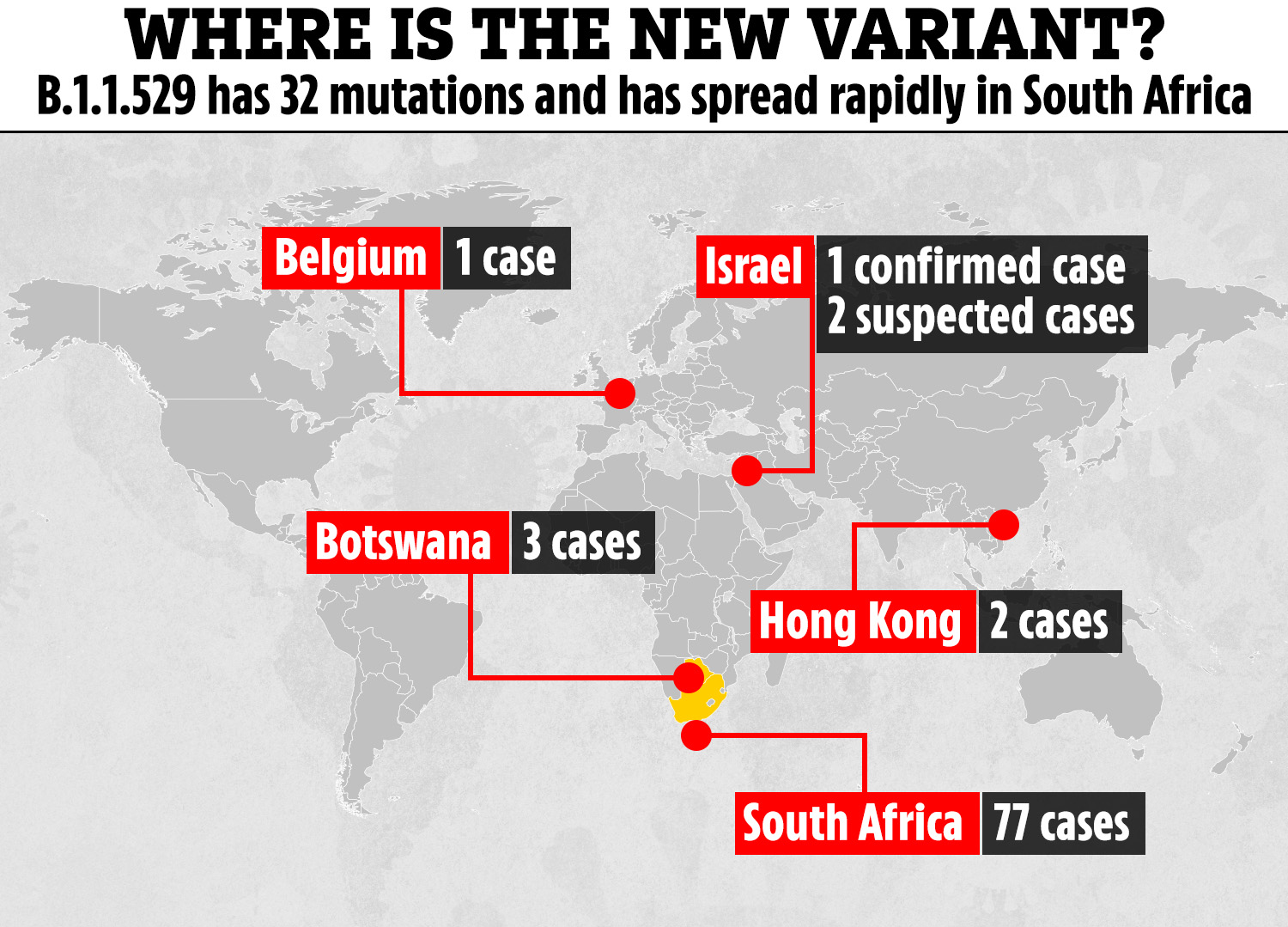 Variant B.1.1.529, now renamed Omicron has twice as many mutations as the delta strain and experts are cautioning that it could force countries back into lockdowns.

It is now known to be in five countries after Belgium detected its first case this afternoon from of an unvaccinated person returning from abroad – the first case in Europe.

Passengers flying to the Netherlands from South Africa were banned from getting off the plane as the continent tightened its borders in an attempt to shut out the strain which scientists have described as the "worst variant ever".

They were eventually let off the runway after being forced to take a test and leave their details with contact tracers.

Heading to the UK from South Africa, other passengers have also been "quarantined" at Amsterdam Airport as the travel ban deadline looms.

Around 150 travellers on a KLM flight say they were held on the tarmac for four hours before being herded into a holding area inside the terminal building.

They were given little information and only one sandwich in eight hours, some people claimed.

Guarded by Dutch military police, one passenger reported scenes of aggression between passengers and members of staff over the issue.

Back in the UK, British arrivals from the variant's epicentre Johannesburg were left to mingle with hundreds of others as they flew into Heathrow on the last flights out of Africa before the red list was re-imposed.

It's been revealed passengers flying into Heathrow said they were not tested or questioned about their travel history.

And now a hunt is underway to track hundreds of passengers who have recently arrived from South Africa, says Health Minister Sajid Javid.

Those who have arrived in the UK from South Africa in recent days are being urged to take a free PCR test as UK health officials hold urgent discussions on how to deal with the new variant threat.

But Angelique Coetzee, the chairwoman of the South African Medical Association, said that it was too early to begin imposing travel restrictions.

"It's a hasty decision," she told the BBC. "I would understand if it was two weeks later and we knew much more about this viral infection that is going

"But for now, it is a storm in a tea cup, we have only become aware of this viral mutation … in the last week.

"So far what we have seen are very mild cases, so I'm not sure why we are all up in arms."

'STORM IN A TEACUP'

It comes as hospitals in the Netherlands prepare for a "Code Black" situation as there could soon not be enough beds available for people struck down by Covid.

Dutch health minister Hugo de Jonge insisted the country is still "very far away" from code black – but Peter Langenbach, chairman of the board of the Maasstad Hospital in Rotterdam disputes this.

And in Germany, hospitals ard filling up fast as authorities forced to fly severely ill people around the country to find intensive care beds.

Professor Lothar Wieler, the head of the Robert Koch Institute, Germany’s federal disease control agency, said the nation was "at a crossroads."

“We have one choice. Either we choose the road that leads to chaos and to a bad end or the one which unburdens the health system and maybe enables a peaceful Christmas."

Germany is even considering making vaccines compulsory amid warnings from Angela Merkel the coming winter will be "worse than anything we've seen".

The frightening variant spreading through southern Africa is also "more transmissible" than Delta and will likely reach Britain, UK ministers have warned.

Mr Javid said: "We are concerned that this new variant may pose substantial risk to public health. The variant has an unusual large number of mutations."

He warned the strain combined elements of the Alpha, Beta and Delta super-strains that surged through Britain during the pandemic.

The Health Secretary added early indications show the current vaccines "may be less effective against it".

He told MPs the "Nu" strain is of "huge international concern" because it could dodge our current crop of vaccines.

The WHO said the first case dates back to November 9 and that the strain looks more likely to infect people who have already survived Covid or been vaccinated.

Outside of Europe, the "horrific" mutation has also been detected in Israel today, with the country's health ministry confirming that one person had tested positive with the strain.

In a statement today, the ministry said two other passengers were also quarantining.

It said that the patient had recently returned from Malawi, which borders Mozambique and Tanzania.

The fact the patient had travelled back from Malawi suggests the variant is making its way through Africa.

There are close to 80 cases of the variant in South Africa and experts warn the strain is behind an explosion of new cases, with some regions seeing a six-fold rise in infections in a matter of days.

The mutation has raised alarm in the country as it has 'spread rapidly' among the young population in one of the country's most populous provinces, Gauteng.

"I ask everyone to be prepared and to fully join in the work around the clock", he added.