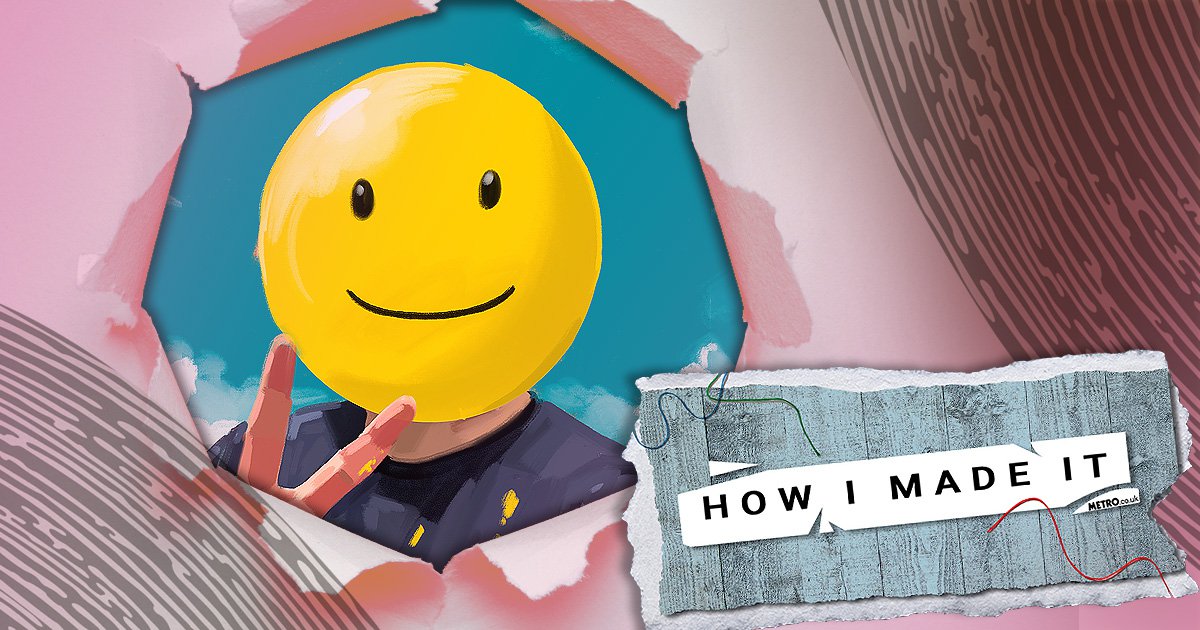 Welcome back to How I Made It, Metro.co.uk’s weekly career journey series.

This week we’re speaking with Reuben Dangoor, an anonymous artist (hence the smiley faced portrait he drew for us), known for creating reaction-based art that comments on British politics, London life and members in the public eye.

Recently he collaborated with NBA for their NBA Creator Series to celebrate the league’s landmark 75th Anniversary Season, drawing players scoring goals in his memorable style.

The North London-based illustrator works hard – often saving his drawing for the evenings after he finishes his day job, so he’s usually working into the night.

He says he’s always had a day job and doesn’t plan on ever stopping that, even though he’s now a well established name in the art world.

Reuben’s work has captured the hearts (and likes, on Instagram) of many – here’s how he made it.

It was something I’d done since I was really young.

I think my folks still have boxes and boxes of illustrations stashed from when I was five or six.

Were you encouraged by anyone to pursue drawing, or were you told it was an unrealistic career path?

I used to read a lot of comic books when I was a kid.

The Beano was one of my favourites as each strip was drawn by a different artist.

I’d sit there and copy all the characters out of it. That’s sort of when I realised you could do it for a job.

Then an old family friend bought some of my drawings for £20 or something and that blew my mind.

Did you ever work in other industries before finding mainstream success? What did you do and how did you fit illustrating around it?

I’ve had lots of jobs – sold a lot of Christmas trees at a garden centre.

Eventually my art got me into the position where I could apply for full time work but in the field I was interested in.

So whilst I wasn’t doing my own illustration it was still flexing the same muscles and keeping me sharp creatively.

I worked in the video game industry for a while as an artist, and worked in advertising and broadcast.

What would you consider to be your ‘big break’? How did it happen?

I painted a series of Grime stars as regal nobility back in 2015 called Legends of the Scene.

The artists, Stormzy, Skepta etc, who were featured in them started sharing them on their socials and it blew up from there.

They were exhibited at Tate Britain for my first ever exhibition and lots of people from all ages came to see them which was amazing to see.

Financially how do you make it work, given how difficult it can be in the arts?

And in the early days it meant I didn’t have that pressure of trying to make money from my creative work and I was free to make what I wanted.

I just had to do it outside of work. Lots of late nights and weekends.

I still work loads of evenings, to be honest.

Did you have any mentors growing up or artists that inspired you?

Loads and loads of artists inspired me.

I think a French artist called Jean Julian really inspired me with his reactive artwork. Something would happen in the world and he would paint a response to it in a matter of hours.

I loved that and have done quite a bit of it since.

The late great Virgil Abloh is another who really inspired me.

For me he was able to create something whatever his medium he would get something original out of it.

It could be a T-shirt, an album cover, a drink bottle, or a luxury car.

What inspires you to draw? How do you decide what to explore in your art?

Anything I feel passionately about.

It could be hearing some music from an artist I love, seeing a film and wondering how I would approach the poster, the result of a football game… they all hit me in different ways and drawing is the way I feel most able to express it.

An average day in the working life of Reuben Dangoor

5pm: His arts-related job finishes, and this is his main source of work.

7pm: Time for personal projects, with artwork being the focus and any new projects he’s taken on.

11pm: The day will wrap up, with passion projects taking up most of his evening.

How did you develop your personal style? Did you do any training/studying?

I studied graphic design at UAL. As a kid I just used to try and copy styles from peoples work I loved, loads 2000 AD artwork, Mobius, some bits would stick and some bits would fall away.

Ultimately, my style is just an extension of my humour and how best to articulate what’s in my head.

What do you love most about your job?

The different worlds I get to dip into or the people I get to work with – it could be sport, politics, musicians and artists or a brand I like.

Not having enough time to do everything I want to.

How I Made It

Do you have an interesting job or career journey?

Email tanyel.mustafa@metro.co.uk to share your story for How I Made It.