Kate Middleton married Prince William on 29 April 2011 and she has since become a full-time working member of the Royal Family. She may carry out a number of her duties by herself, but Kate is also often accompanied by other members of the family. These outings have showed her great relationship with royals including Meghan Markle, 37, Prince Harry, 34, and the Queen, 93. A look at her body language reveals the Duchess of Cambridge’s close bond with the Royal Family.

Kate was always a slow but steady integrator into the royal firm and her slightly traditional approach, making very few if any ripples in continuity, does seem to have resonated with the Queen.

Being married to the second in line to the throne, Kate has spent a lot of time with the current monarch, Queen Elizabeth II.

Judi said: “Kate was always a slow but steady integrator into the royal firm and her slightly traditional approach, making very few if any ripples in continuity, does seem to have resonated with the Queen, who increasingly appears to treat her as a friend as well as a daughter-in-law.”

Recently, the pair were spotted together at Chelsea Flower Show and acted like friends.

“The Queen’s sudden broad and authentic-looking smile said it all at the Chelsea Flower Show,” Judi added.

“It appeared from nowhere as she caught sight of Kate approaching, registering instant warmth for the future queen, while Kate’s part-smile part-laugh response showed her genuine excitement at hosting her grandmother-in-law.”

When out with her father-in-law, Prince Charles, 70, the pair seem very affectionate with each other.

At The Passchendaele Commemorations In Belgium, they show their bond as both are seen smiling as they greet each other with a kiss on the cheek. 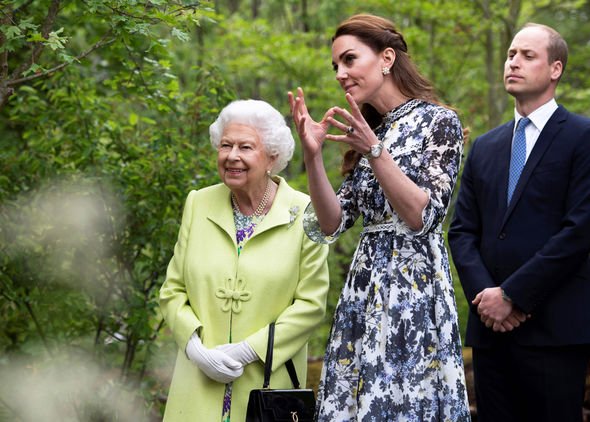 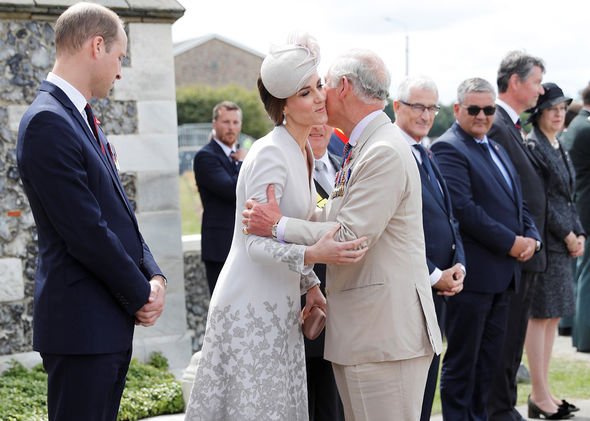 Over the years, Kate has worked closely with her brother-in-law, Prince Harry and they have shown their genuine bond.

Recently, they arrived together for a service to honour the Antipodean soldiers who gave their lives in WWI on Anzac Day.

Judi said: “Harry was clearly having fun in Kate’s company, with their mirrored body language and their prolonged eye contact.

“Their smiles were both matching and congruent, with rounded ‘Apple’ cheeks and eye-smiles and they were what is called ‘pinging’ smiles, meaning they seemed to bounce off one another.

“Kate’s open-mouth smile complete with the same slight jaw-jut we saw at Easter was matched by Harry’s smile and his V shaped eyebrows signaled the pair were sharing the same sense of humour.”

Not only does the Duchess get on well with Harry, but she also has a close relationship with his wife, Meghan Markle.

The sisters-in-law shared a real warmth with each other by using a loving greeting at a recent Commonwealth Day service.

Judi explained: “The two duchesses do seem to have used this air-kiss to signal some genuine warmth between them.

“Meghan’s response was quickly reciprocal and her left hand rose to mirror Kate’s touch in what looked like an act of warmth.

“Her hand was ballerina-style elegant rather than clutching but her thumb went up in a gesture that often signals pleasure.

“They performed a double air-kiss and then came what looked like a very subtle lingering of the greeting that can suggest a reluctance to part rather than a swift pulling away.” 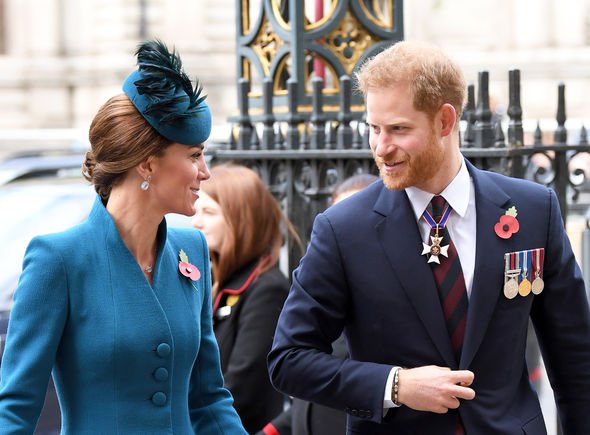 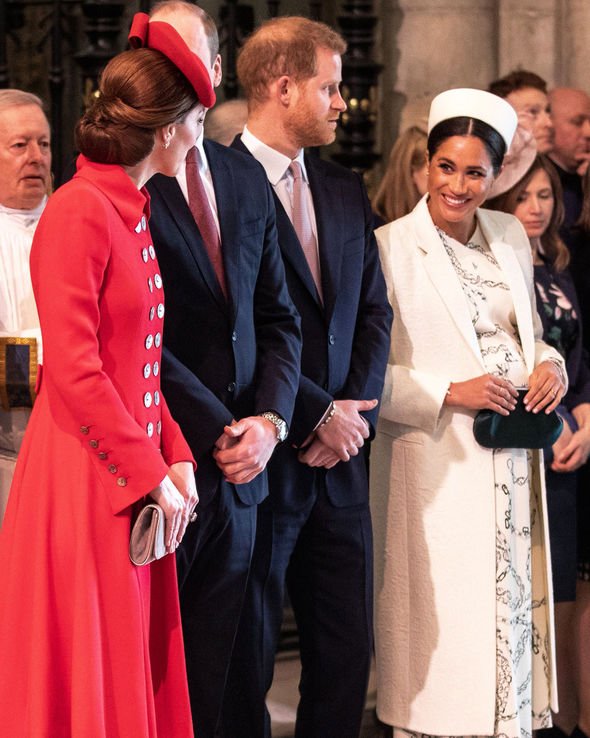 Kate has also shown a close relationship with Sophie, Countess of Wessex and the pair are often spotted smiling together at events.

At Princess Eugenie’s wedding, the pair laughed together and their body language suggested a close relationship.

Kate seems to have a close relationship with her cousins-in-law, Princess Eugenie, 29, and Princess Beatrice, 30.

At a dinner to celebrate St. Andrews 600th anniversary in 2014, Kate was spotted greeting Eugenie with an affection kiss on the cheek.

The pair showed their closeness as they continued to talk with Kate resting her arm on Eugenie’s.

At Royal Ascot 2017, Kate spent a lot of time with Princess Beatrice, and they were both spotted grinning as they chatted. 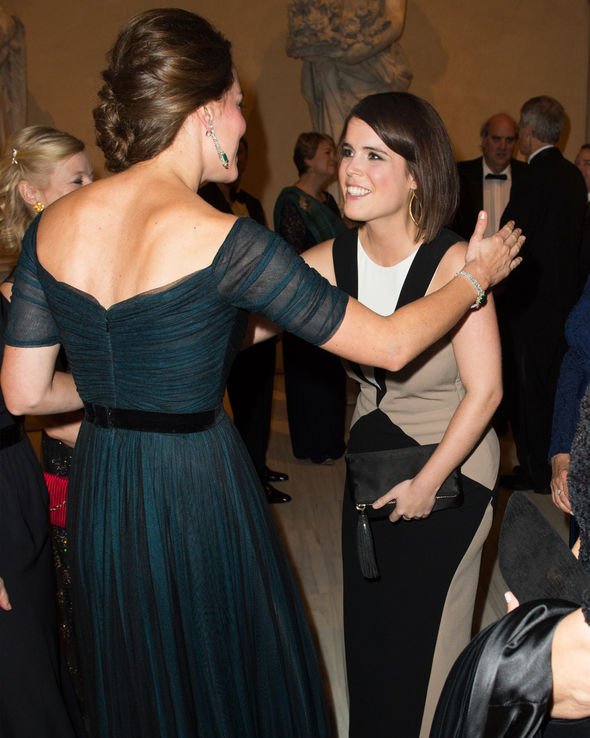 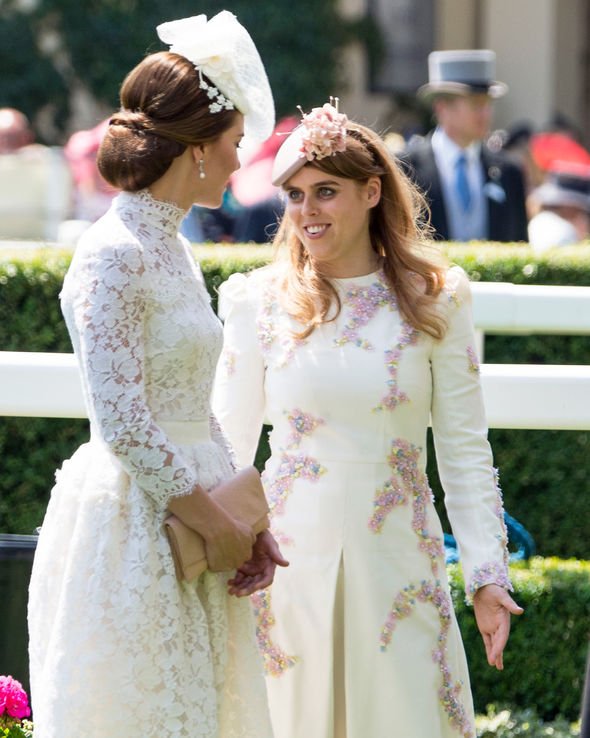 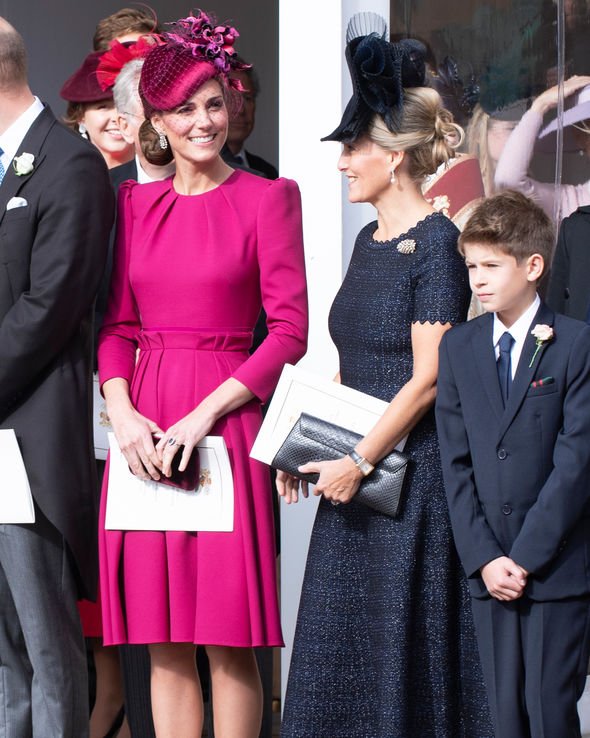 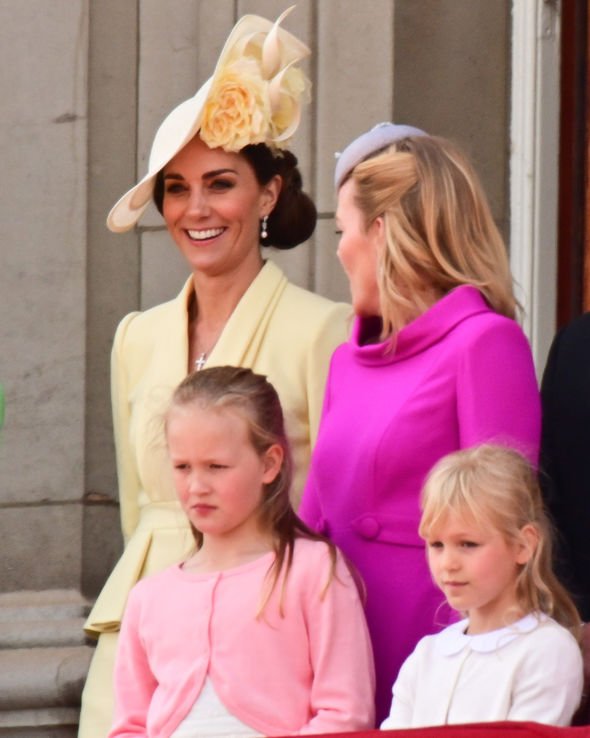 Kate and her cousin-in-law, Zara Tindall, appear to get on well when they are spotted out together.

At the Easter Sunday service, the pair were caught laughing as Kate turned to speak to Zara.

Standing next to each other at Buckingham Palace for Trooping the Colour, the royals look like they have a warm relationship.

They were both seen grinning as they chatted on the balcony of the palace.