Victorian Opposition Leader Michael O’Brien will pitch himself as “experienced” and a “team player” while attempting to frame Premier Daniel Andrews as “arrogant” and “obsessed with spin” ahead of the 2022 poll.

With pressure mounting over his leadership, Mr O’Brien issued the strategy memo to colleagues, which includes policy promises and attack lines, ahead of Parliament’s return on Tuesday. 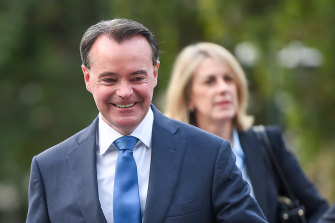 In an email to all Coalition MPs last Friday, Mr O’Brien said the two-page “message framework” document was the result of “election preparation” undertaken by his office over the five-week winter break.

“Development of this framework has been guided by our overarching goal of best positioning our parties to win the election, assisted by the insights of our community engagement program,” Mr O’Brien said.

According to a leaked internal memo, the Coalition is anticipating the election to be held "in a post-COVID environment" and will hound Labor about ballooning hospital waiting lists while talking up help for small business, as it tries to win support from disillusioned voters.

The strategy document also advises MPs to blame the state government for losing major events such as the 2020 AFL Grand Final, Formula One grand prix and for overseeing Melbourne’s plummeting position in the latest liveability index.

With less than 16 months to polling day and with his leadership under threat, Mr O’Brien also reminded colleagues of six Coalition policies that will be part of his campaign, including lifting the payroll tax thresholds, a housing boost for regional Victoria and waste reduction.

One of the six policies listed in the document is a Coalition pledge to tear up Victoria's controversial Belt and Road agreement with the Chinese government, which the federal government axed in April over concerns it was inconsistent with the country’s national interest.

As part of their campaigns, MPs have been instructed to incorporate the “positive short message” that “only the Liberal Nationals have a plan to get Victoria back on top” into election material.

The document also includes a list of “positive longer messages” that MPs are encouraged to use, including the promise of “diversifying the economy and prioritising education and training to protect job security and wages, meaning more opportunities for young people to kick-start their careers”. 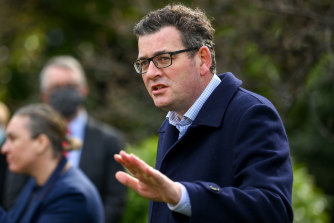 The document has also been provided to the party’s advertising agency, which is preparing material based on the memo.

He said federal campaign slogans such as “Labor’s death tax” and “stop the boats” were effective at relaying a message.

“People don’t have time for longer messaging which relies on them finding out more about a plan," he said.

Dr Hughes also warned that promises of "stability" and "diversifying the economy" would do little to woo voters who seek "tangible promises" such as infrastructure that offered "instantaneous rewards”.

However, he praised Mr O’Brien for steering clear of law and order attacks after a review by the Liberal Party found former opposition leader Matthew Guy’s focus on the so-called “crime tsunami” at the 2018 election failed as a tactic because Victorians didn’t feel unsafe.

The memo urges Coalition MPs to frame Mr Andrews as “arrogant” and more worried about his “political and ideological interest than the interests of the state”. By contrast, Mr O’Brien, who took over as leader in 2018, will be pitched as “experienced” and a “safe pair of hands”.

Dr Hughes warned against linking every attack line to Mr Andrews, who continues to enjoy a healthy lead in the polls despite sending Victorians into a fifth lockdown in recent weeks.

“They need to leave Daniel Andrews alone and not make it a popularity contest because O’Brien will lose,” Dr Hughes said. “You can’t touch Andrews at the moment and attacking him directly comes across as grubby personal politics.”

The strategy document also includes a five-point plan to “get Victoria back on top”. Dr Hughes said the framework was risky as it encouraged MPs to recall lines and not be authentic.

He cited a 2013 example of Jaymes Diaz, the federal Liberal Party's candidate for Greenway who gained unwanted notoriety when he could only recall one of the Coalition’s “six-point plan” to stop the boats.

Internally, the Coalition’s “message framework” is being widely interpreted as a warning to Mr O’Brien’s critics who have, in the past, accused the Opposition Leader of lacking direction and failing to land a blow on Mr Andrews during the pandemic.

But several Liberals MPs criticised the two-page document, saying it lacked the in-depth strategy needed to topple the Andrews government.

One Liberal MP said the document was "ill-informed" and demonstrated a "failure of planning and leadership", describing it as the work of "a pack of rank amateurs". 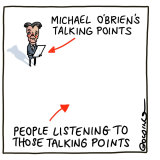 “Where’s the big job attraction policy and post-COVID stimulus package,” said one Liberal MP, speaking to The Age on the condition of anonymity.

Liberal sources confirmed to The Age that the Coalition was working on a series of bigger policy initiatives, but would wait until closer to the election before the plans are made public.