The world is waiting for a "suicidal" Australia to reverse its stance on climate change, says one of the world's most senior diplomats.

Christiana Figueres, who was executive secretary of the United Nations Framework Convention on Climate Change through the Paris Agreement talks, said the world expected more from Australia in the lead-up to the so-called COP26 climate talks to be held in Glasgow next November. 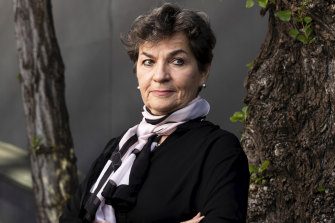 "The climate wars that have been going on in Australia for over a decade now are just – honestly they are such a suicidal situation because Australia… holds such promise with renewable energy," she told John Connor, chief executive of the Carbon Market Institute, in a conversation recorded for the Australasian Emissions Reductions Summit, which begins online on Wednesday.

"There is no other country that has as much sun potential as Australia," said Ms Figueres, who is now the director of the global climate movement Mission 2020.

"I've been pretty vocal about my frustration for so many years of a completely unstable, volatile, unpredictable stand and position on climate change in Australia."

She likened the possibility that Australia might use what the government calls carry-over credits from the Kyoto agreement to using points scored in one sporting match towards the results of another.

"It is just a total lack of integrity and not something that does Australia proud," she said.

Last month Prime Minister Scott Morrison said that he believed Australia may be able to reach Paris targets without relying on Kyoto credits.

In a second conversation for the conference, United Nations Principles for Responsible Investment chief executive Fiona Reynolds said anyone who failed to accept that climate sustainability had now moved into the mainstream and was being embedded in financial regulations would soon be left behind.

She said that soon it would not be enough to ask individual companies to set net-zero targets, because investors were now demanding such targets across their whole portfolios.

She predicted that the next frontier in investing would be in so-called negative emissions technologies and practices, which reduce the amount of greenhouse gas already in the atmosphere.

Climate solutions based on avoiding deforestation and other "viable near-term opportunities" in removing carbon could generate $US800 billion in revenues by 2050 and assets valued at well over $US1.2 trillion, more than the current value of the major oil and gas companies.

The conference is being held in the lead-up to a December 12 United Nations meeting in which national governments will be invited to present more ambitious climate plans – including COVID-19 recovery plans – designed to limit global warming to 1.5 degrees celsius.

Others to address the first day of the conference on Wednesday include Alok Sharma, president of COP26 and British Secretary of State for Business, Energy and Industrial Strategy and Jim Skea of the Intergovernmental Panel on Climate Change, as well as Australian business leaders Shayne Elliott from ANZ and Mike Cannon-Brookes of Atlassian.